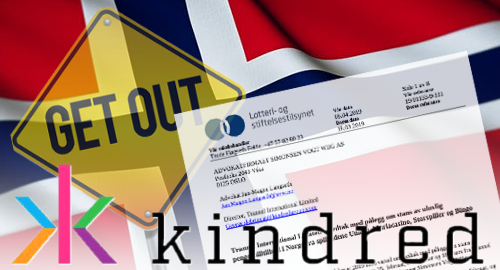 Norway’s gambling regulator has ordered four Kindred Group brands out of the country’s restricted market but the operator isn’t leaving without a fight.

On Monday, Norway’s Lotteritilsynet gaming regulatory body ordered Trannel International Ltd, Kindred’s Malta-based offshoot that oversees the operations of Kindred brands Unibet, MariaCasino, Storspiller and Bingo.com, to “stop the illegal offer of money games from these gaming sites.” The regulator has given Trannel three weeks in which to comply or face the consequences.

A few months back, Lotteritilsynet put six Malta-licensed online gambling operators – including Trannel – on a list of companies with which Norwegian financial institutions were prohibited from processing transactions. Lotteritilsynet’s case against Trannel includes the allegation that the sites advised Norwegian players on how to avoid these payment restrictions.

Lotteritilsynet maintains that any online gambling site that engages in Norwegian-language marketing, offers a Norwegian language option and accepts Norwegian currency is breaking Norwegian law. More importantly, these international sites are horning in on the action of the state gambling monopolies Norsk Tipping (betting) and Norsk Rikstoto (racing).

Kindred is appealing the GTFO order based on its argument that nothing in European Economic Area rules prohibits it from accepting Norwegian action and that Norway lacks the authority to project its authority beyond its borders. But Lotteritilsynet says the arguments Trannel has made to date “do not contain any comments that are of significance for the Gaming Authority’s assessment” of the situation.

Norway recently claimed to be winning the war to purge its online gambling marketplace of internationally licensed interlopers, although Lotteritilsynet’s own stats for 2018 show that, even if Norwegian punters are playing less with international sites, they’re not transferring their affections to the state-approves monopolies.

In other Kindred news, the company is withdrawing its female-focused MariaCasino brand from the UK market as of May 7, with account withdrawals permitted until May 14. Kindred plans to steer the site’s UK players to the company’s more popular Unibet and 32Red brands.