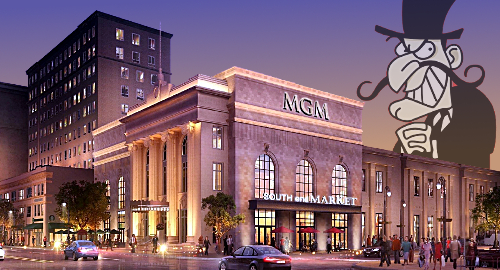 Massachusetts’ newest casino is a crime magnet, at least, according to local police reports.

According to the report, Massachusetts State Police recorded 208 incidents and 120 arrests inside MGM Springfield between September and December 2018. The incidents included 16 larcenies and robberies, five assaults and two sexual offenses. Meanwhile, police responded to just 115 incidents at Plainridge Park throughout all of 2018.

Crime was also on the rise outside MGM Springfield. There were 22 crimes reported in the area surrounding the casino in the three months prior to its August opening, and 115 crimes in the five months following its opening.

A comprehensive public safety report on crime during the Springfield property’s first three months of operation won’t be released until March. But the initial data stands in stark comparison to Massachusetts Gaming Commission (MGC) studies that showed no surge of crime following Plainridge Park’s June 2015 opening, findings that were supported by later studies.

Meanwhile, the MGC’s official gaming revenue figures show the two casinos combined for nearly $35.7m in December, a modest improvement over November’s $34.1m. MGM earned $21.6m, essentially flat from November, while Plainridge was up around $1.25m to $14.1m.

Judd-Stein, who previously served as deputy chief legal counsel in the governor’s office, is stepping into a very hot seat. The MGC is wrestling with the ongoing question of whether or not Wynn Resorts will be found suitable to operate the $2.5b Encore Boston Harbor casino, which is scheduled to open in June. The controversy contributed to Crosby’s decision to reach for the eject lever and promises to continue to roil the MGC for the rest of this year and possibly well beyond.