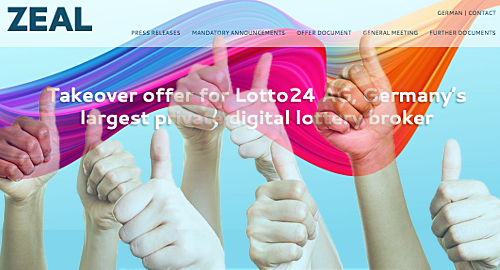 On Friday, Zeal held a general meeting in London, after which the company announced that 60% of its shareholders had approved necessary preconditions for the proposed acquisition of Lotto24, a former ZEAL subsidiary that was spun off into a standalone entity in 2012.

ZEAL said it would now proceed with its formal pitch to Lotto24 shareholders and expects the acceptance period for the takeover offer will start by the end of this month.

ZEAL shareholders also narrowly voted 51.4% in favor of waiving the requirement for the Günther Group – which will hold a 30% share of the combined group after completion of the Lotto24 acquisition – to make a full takeover effort for ZEAL. Günther Group was not allowed to participate in this vote.

ZEAL’s efforts to reacquire Lotto24 were complicated by Lottoland, which holds a 5.5% stake in Zeal and last week announced a rival plan to acquire ZEAL’s German-facing ‘secondary lottery’ unit Tipp24.com, which generates most of ZEAL’s revenue. ZEAL plans to morph Tipp24 into a legal reseller of lottery products to eliminate uncertainty regarding Germany’s efforts to crack down on lottery betting operators.

Lottoland CEO Nigel Birrell issued a statement expressing disappointment with the results of Friday’s vote and repeating his claim that the Lotto24 acquisition was the wrong step for ZEAL. Birrell pointed to the squeaker vote regarding Günther Group to buttress his claims that shareholders hadn’t given ZEAL “a clear mandate” to proceed with the acquisition.