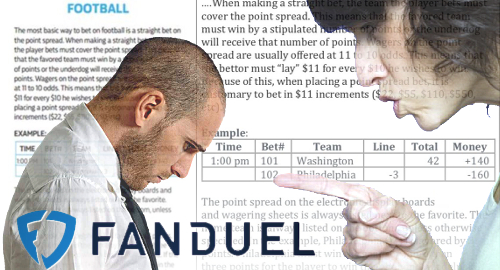 This week, the Associated Press reported that William Hill’s US division had settled the civil lawsuit it filed last October against rival Paddy Power Betfair’s US-facing FanDuel brand. William Hill US CEO Joe Asher said the settlement with FanDuel was reached a couple weeks ago, but was only made public on Monday.

The lawsuit was sparked after eagle-eyed Hills staffers noted that FanDuel’s ‘How to Bet Betting Guide’ was remarkably similar to Hills’ own How To Bet Guide, which was produced for the aid of New Jersey’s novice sports bettors ahead of the state’s launch of legal wagering last June.

Further examination revealed wholesale sections of FanDuel’s guide appeared to have been cut-and-pasted from Hills’ document. The smoking gun came when one passage in FanDuel’s guide referred to certain types of “professional wagers offered by William Hill.” Incredibly, the would-be prose thieves had neglected to swap Hills’ name for FanDuel’s.

At the time it filed its lawsuit, Hills chose to twist the knife by having Asher insist that the company would use any financial windfall from the suit to fund “scholarships for creative writing programs at New Jersey universities.” On Monday, Asher declined to specify how much ransom Hills had forced FanDuel to cough up, but confirmed that some of that scratch would fund those writing programs while the rest would be directed to responsible gambling programs.

HILLS EXPAND NEVADA PRESENCE
William Hill US has a thriving presence in Nevada’s sports betting market, operating sportsbooks in 107 of the state’s 190 licensed casinos, and that presence is going to grow bigger after state regulators gave initial approval to the company’s expansion plans.

Last week, the Nevada Gaming Control Board looked favorably upon Hills’ plan to launch sportsbook operations at an additional seven venues, including four properties operated by Golden Entertainment, two operated by Eldorado Resorts as well as the Jerry’s Nugget Casino in North Las Vegas. The Nevada Gaming Commission will vote on the Board’s recommendations at its upcoming meeting on January 24.