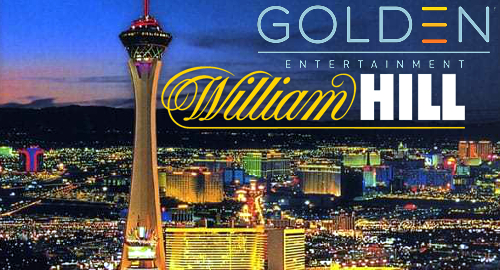 On Tuesday, Golden announced a dramatic expansion of its existing relationship with William Hill US, agreeing to a “long-term” deal under which Hills will manage Golden’s race and sports betting operations in Nevada, Maryland and Montana.

Of those three states, only Nevada currently permits sports betting, but tempus fugit appears to be the mission statement for all gambling operators looking to stake claims in the rapidly expanding US wagering sector.

Pending Nevada regulatory approval, Hills will now oversee betting ops at the four Nevada properties that Golden acquired via its 2017 deal for American Casino & Entertainment Properties (ACEP), including the Stratosphere (pictured) in Vegas. Hills will also continue to operate the books at the Edgewater and Colorado Belle casinos in Laughlin, which Golden acquired from Marnell Gaming in July.

As for the Maryland and Montana betting aspirations, Golden took ownership of Maryland’s Rocky Gap casino as part of its ACEP deal, and Golden has ‘distributed gaming’ operations at around 300 locations across Montana.

Golden COO Steve Arcana said he looked forward to utilizing Hills’ “proven sportsbook” to help grow his company’s business “in Nevada and other jurisdictions.” William Hill US CEO Joe Asher returned the compliment, saying the company has “an excellent relationship” with Golden and the partners were looking forward to squashing their competitors like the insignificant, worthless bugs that they are. (We’re paraphrasing.)

Golden reported revenue of $216.5m in the second quarter of 2018, nearly twice the sum reported in the same period last year, reflecting its ACEP additions, while net income more than doubled to $3.6m. In addition to its operations in the three states mentioned above, Golden also holds an Illinois video gaming terminal (VGT) license.