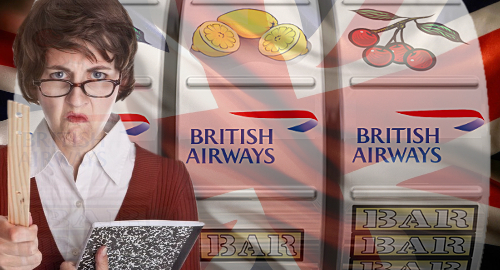 Yet another gambling advert is riling up the UK media, but this time the target of their ire is British Airways.

On Tuesday, the Guardian reported that the UK’s Advertising Standards Authority (ASA) was fielding complaints about a recent British Airways Holidays television commercial, in which a holiday couple relates a tale about winning a small slot machine jackpot at an unspecified resort.

The ad features the happy couple returning to their hotel room while explaining how they “had a bit of spare change so we put it in the slot machine … and won a couple of dollars. So we put it back in and the next thing we know we’d won $493. Luckiest dip ever.”

The usual suspects, including the Campaign for Fairer Gambling, are up in arms based on their view that the ad is promoting gambling. Former Tory party leader Iain Duncan Smith claimed to be “stunned” by the airline’s decision to approve the “utterly appalling” commercial.

Marc Etches, CEO of the industry-funded responsible gambling charity GambleAware, took a slightly more diplomatic tack, suggesting that “companies need to recognize their responsibility to make sure people are aware of the risks of gambling.”

The BA advert is likely raising more hackles than usual given the UK gambling industry’s pre-Christmas announcement of a voluntary ban on gambling ads during live sports broadcasts that will take effect this summer.

An ASA spokesperson said the BA ad had generated public complaints “on grounds that it promotes gambling and portrays it in a glamorous and frivolous way, and that it’s irresponsible.” However, the ASA is still assessing whether the ad violated any advertising codes.

A British Airways Holidays spokesperson claimed the ad in question “was cleared with the industry body, Clearcast, ensuring it is appropriate for broadcast.” The airline added that this ad was one of a series “promoting a range of special memories” that customers experience via their travel.