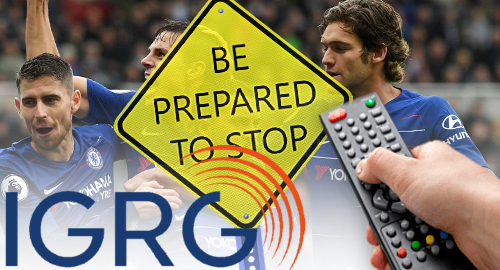 On Thursday, the Industry Group for Responsible Gambling (IGRG) announced “major changes to its Gambling Industry Code for Socially Responsible Advertising.” The proposed changes are expected to be introduced “in the summer of 2019.”

The new rules impose a ban on all betting adverts during pre-watershed (9pm) live sport, starting five minutes before kickoff and extending five minutes after the match is over. Betting adverts will also not be permitted on non-live sports broadcasts, such as highlight shows and re-runs, while the new regime also calls time on pre-watershed bookie sponsorship of sports programs.

The rules will also apply to online and mobile live-streamed sports events. However, the rules won’t apply to horse and greyhound racing programs, because these industries have (a) no point for existing outside of betting, and (b) kids have absolutely no interest in watching these events.

The rules are intended to complement separate measures introduced by broadcasters such as Sky, which announced in November that it would limit bookmaker adverts to one per commercial break, regardless of the program subject material.

IGRG chairman John Hagan said the new rules, which were approved by industry groups such as the Remote Gambling Association, “will drastically reduce the amount of gambling advertising on television.” However drastic, Hagan said the step was a necessary step to ensure “the ever, safer gambling environment which gambling consumers and the wider public expect.”

Jeremy Wright, the Secretary of State for Digital, Culture, Media and Sport, called the new rules “a welcome move” that will protect children and vulnerable people from “the threat of gambling-related harm.” UK Gambling Commission CEO Neil McArthur called Thursday’s news “a significant step forward” in proving that the industry wasn’t completely deaf to public cries for restraint.

However, Labour Party deputy leader Tom Watson said Thursday’s news was only a “first step” and that the industry must now take steps to reduce its online advertising, which recent studies have shown represents 80% of UK gambling operators’ marketing spend.

The UK’s Institute of Practitioners in Advertising (IPA) was less chuffed with the new rules, as director-general Paul Bainsfair told Campaign there will be “a significant loss of revenue for all parties” involved in the UK’s ad market. One agency source suggested the ad market could take a £200m annual hit from the changes.

A Harris Interactive Survey conducted this month found that, while some bettors would reduce their gambling activity following the ban, a majority of bettors and the general public believe the ad ban will fail to achieve any reduction of underage gambling.