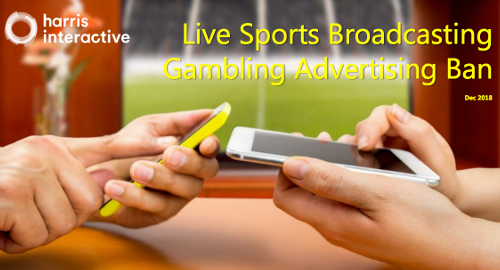 UK sports betting operators may or may not have agreed to a television advertising ban, but nearly one-fifth of bettors say such a ban will cause them to stop wagering on live sports.

On Thursday, the Remote Gambling Association (RGA) denied a BBC report which claimed that RGA members had agreed to a ‘whistle-to-whistle’ ban on gambling promos during live sports broadcasts. However, industry scuttlebutt has it that such an announcement may come as early as next week.

That will apparently be just fine with the UK television audience, according to a new survey by Harris Interactive, which conducted a snap poll of 963 respondents after the BBC report emerged. The survey audience was comprised of 527 females and 436 males, with 232 respondents aged 18-34 years, 332 aged 35-54 and the remaining 399 aged 55+.

More than four-fifths (81%) of those surveyed were in favor of the live sports betting ad ban, although this number shrunk to 66% when the focus was narrowed to those who actually place online sports wagers. Active bettors were also far more aware of the ban (51%) than the general public (35%).

However, the survey found only minority support in both the general public (49%) and bettors (38%) for the claim that betting ads “fuel underage gambling.” Even smaller slices of both groups believe the ad ban will result in an actual reduction in underage gambling.

In fact, the poll found no majority support for the idea that the ban would result in reductions in gambling spending, but in each case, active bettors were more likely to believe there would be a bigger impact on responsible gambling behavior.

Cynicism was rife when it came to the motivation of the gambling companies taking this ‘voluntary’ step, with over two-thirds of each focus group believing the companies were only acting due to government pressure. Only 46% of bettors said their perception of gambling firms would improve as a result of the ban, while only 35% of the general public agreed.

A majority of the general public wants to see the ad ban extended to pitchside advertising (54%) and shirt sponsorship (53%), although only 47% suggested league sponsorships should also be banned. Less than two-fifths of active bettors agreed with the pitchside and shirt bans.