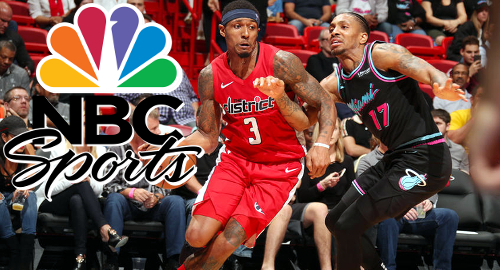 On Monday, Sports Business Journal reported that NBC Sports will air “an interactive, alternate telecast” of Thursday’s NBA matchup pitting the Washington Wizards against the Milwaukee Bucks that will focus on the game’s in-play betting opportunities.

This alternate broadcast, which will air on the NBC Sports Washington Plus overflow channel, will feature the same announcers and advertising breaks as the regular feed. But the broadcast will include onscreen graphics detailing statistics, odds and point spreads that will update along with the action on the court. NBC plans to air eight such games over the rest of this season.

District of Columbia legislators approved a sports betting bill shortly before Christmas, so it will still be a while before DC actually launches legal wagering. But NBC’s website will offer a ‘free-to-play predictive contest’ that will involve viewers answering 30 in-play style questions regarding individual player performance and the like for a chance to win a $500 prize.

NBC Sports Regional Networks president David Preschlack said this ‘Predict the Game’ contest represented NBC “trying to figure out ways to appeal to casual sports bettors to make the games more interesting.” Zach Leonsis, senior VP of strategic initiatives for the group that owns the Wizards, called it “the 1.0 version of where we’re ultimately going.”

NBC’s keen interest in betting was outed shortly before Christmas, when it was revealed that the broadcaster had registered a number of betting-related domains, including NBCSportsbook.com. The company reportedly failed to act swiftly enough to secure the dot-com versions of NBCSportsBet and NBCSportsBetting from opportunistic cyber-squatters.

Meanwhile, DC bettors may not like their local digital wagering option when it does arrive. Last week, Legal Sports Report obtained a draft bill that would bypass a competitive bidding process for online and mobile sports betting permits and instead authorize DC Lottery tech supplier Intralot to operate as a digital betting monopoly. The proposal will be discussed at this Tuesday’s DC Council meeting.