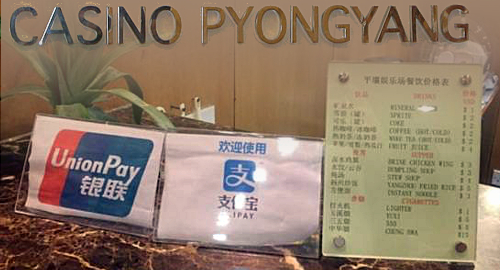 A casino in North Korea’s capital Pyongyang has no ties to Chinese online payment platforms, at least, not according to the platforms.

North Koreans have no access to websites beyond the nation’s borders but the casino is reportedly offering free WiFi to its guests, allegedly to ensure its gambling guests don’t cash out too soon. NK News quoted a tour guide with the China-based Young Pioneers Tours saying the services appeared intended to offer “options for high-rollers to gain access to money while gambling.”

NK News published a photo of a desk display at the casino that clearly shows Alipay and UnionPay logos. The report noted that facilitating international financial transactions with any firm connected with the North Korean regime could represent a violation of sanctions imposed by both the United Nations and the United States.

In August, both Alipay and WeChat announced payment deals with Manila’s Solaire Resort & Casino, spurred by the rise of Chinese tourism to gaming venues in the Philippines. Such services are also available in some Macau venues, although they cannot be used to fund gaming activity.

North Korea has only a few land-based casinos, including the Imperial Hotel & Casino in the Rason free trade zone. The country has been trying to expand this industry – even going as far as to pitch international investors on its prospects – in order to generate some badly needed hard currency.

Late last month, North Korea halted work on a major hotel-casino project in Sinuiju, an economic zone along Noth Korea’s border with China that would have, like its other venues, relied heavily on a Chinese clientele. There was some debate as to whether the work stoppage was due to pressure from Beijing or whether the project’s developers simply ran out of money.

However, the Korea Herald reported this week that North Korean leader Kim Jong-Un ordered the halt “upon hearing that the Chinese government is negative about North Korea’s casino project.” Kim reportedly imposed a moratorium on “all troublesome casino projects” for fear of annoying the regime’s only real friend in the region.