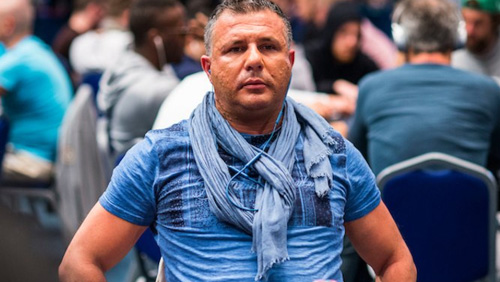 Three updates from $/€10,000 events from around the world including Akin Tuna winning in Prague, and Sam Soverel and Joshua Ladines doing likewise at the Bellagio.

I didn’t ask for it.

It just appeared next to my brown beaker.

Liza had always told me to use a straw when drinking water in restaurants as you never know what other mug had sipped from the mug you’re about to slap your tongue all over like some young lover.

“You’ve just killed a turtle,” said my niece pointing to my straw.

“You’ve just killed a tuna,” I replied, pointing to the forkful of the beast about to meet her stomach acid.

While the world begins slaughtering 10 million Turkeys, a man from a country named after the bird with a woman’s jiggly bits stuck underneath its chin, has taken down the first €10k at that very event.

It’s the first time poker playing WAGS have opened makeup boxes in a Prague EPT since 2016, and the turnout for the first €10k was as impressive as warty frog coloured lipstick

38 entrants (9 re-entries) created a total prize pool of €286,600, and close to half of that ended up in the bank account of the aptly named Akin Tuna.

It’s the first time Tuna has won a poker tournament and only his 19th career cash. It doesn’t even register as his most significant score with the €290,000 he took away from the €10k at EPT Dublin back in 2016 hogging that title.

Tuna came into the event as finely tuned as a hummingbird’s wing, after finishing runner-up to Daniyar Aubakirov in a $10,000 High Roller at the Merit Gangsters Poker Cup in Kyrenia banking $196,060, and he overcame a tough final table to go one further in this one.

Joining Tuna at the final table was his compatriot Orpen Kisacikoglu who is making a habit of making the final tables of €10k+ buy-in events without ever making it to the deeper waters of these things (nine final tables in 2018).

Two Belgians made the final, including the Triple Crown winner, and partypoker MILLIONS Grand Final €25k winner, David Kitai, and then you had the EPT High Rolling hot dog, Daniel Dvoress.

The man who came into this one with the full heat of liver in the mouth of Hannibal Lector was the former EPT Champion Ognyan Dimov who won a World Series of Poker (WSOP) bracelet in the summer, before finishing 3/1931 in EPT Barcelona for €725,621 back in August.

And that’s who Tuna faced in the final battle. It began with Tuna holding a 1.1m v 880k chip lead. Dimov doubled up a few times, but he never once saw his stack tower above the Turk’s. The final action saw Tuna turning quads to extract every single chip from the Bulgarian who had flopped a straight holding the flea-ridden flea-looking 86o.

So why the low turnout?

EPT Barcelona’s first €10k on the menu attracted 124-entrants, and 71 chewed the meat off the bone of the EPT Monte Carlo offering.

If the EPT suffered from the presence of the Five Diamond, then the reverse is true. Two $10,000 Pot-Limit Omaha tournaments are in the books, and both of them dragged in fields the size of the Boston Strangler’s fan club.

The star of the show thus far is Sam Soverel.

Soverel won one and finished fifth in the other extending his lead over David Peters in the Poker Central High Roller of the Year leaderboard (not that it matters, as Soverel is already in the Super High Roller Bowl lineup).

The other kiddy who had a great one-two was Joshua Ladines. The high stakes cash game grinder won one event and finished third in the other. Ryan Tosoc followed up his runner-up spot in the World Series of Poker Circuit (WSOPC) Main Event at Planet Hollywood with a cash, and Jonathan Depa booked his fourth runner-up finish in a $10k+ event since September.

*Note: PokerCentral has not altered these figures since Soverel’s recent burst of whatever you want to call it, so I have no idea why I am showing them to you, but it’s better than nothing.