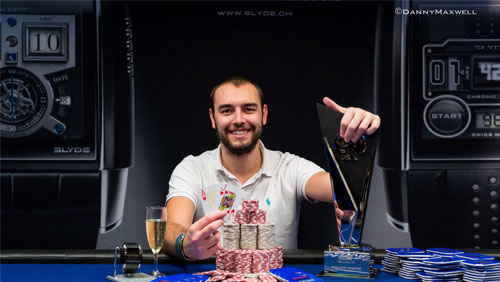 Ognyan Dimov becomes only the second player from Bulgaria to win a European Poker Tour (EPT) Main Event title, with victory in the €5,300 curtain closer in Deauville.

He defeated Romanian Dany Parlafes, in heads-up action, and his €543,700 first prize catapults him to fifth place in the Bulgarian all-time live tournament earners. The top two—Dimitar Danchev and Simeon Naydenov—were both on hand to rail their countryman to victory.

The Deauville event is always considered one of the weaker events on the EPT. 592 players took advantage of that assumption, and a €2.8m prize pool was the net outcome of that.

Prior to his win Dimov’s previous best performance, in an EPT Main Event, was an 11th place finish at EPT London earlier in the season. Kevin MacPhee finished that one as runner-up to Sebastian Pauli, and the American would have another great run finishing 11th in this one. It won’t be too long before we see MacPhee adding another major title to his already impressive CV.

MacPhee wasn’t the only bit of quality enjoying a deep run at the Casino Barriere de Deauville. It was great to see Guillaume Darcourt back at the right end of things. The pink hair was gone; his loose-aggressive style remained. Darcourt ending in 19th place.

Bertrand “ElkY” Grospellier celebrated his call up to Global Poker Masters (GPM) French squad by finishing in 31st place, the former EPT London winner Ruben Visser ended in 28th, and the consistency of the Spaniard Sergio Aido was once again to the fore with a 21st place finish.

Coming into the final table, the star attraction was Benjamin Pollak. The London-based Frenchman once again proving why he is the current Global Poker Index (GPI) No.1 into his native country. Pollak’s name recently hit the headlines after his sponsor Betclic Everest Group banned him from playing in the upcoming GPM after a dispute over sponsorship. Pollak’s charge ending in fourth after losing out straight over straight to Parlafes.

If Pollak was the star, Matas Cimbolas was the man with the map to major title glory. The Lithuanian recently defeated Ben Warrington to win the World Poker Tour (WPT) UK Main Event in Dusk till Dawn (DTD), and he must be delighted with his eighth place finish.

The heads-up encounter between Dimov and Parlafes lasted 117 hands. The 117th hand a predictable squabble between two of the best starting hands in Hold’em. Dimov finding [Ah] [Jh], Parlafes the dominating [Ac] [Kc], but three hearts later Dimov was being crowned the new champion.

“It’s so exciting,” Dimov told PokerNews after his win. “I am really happy, and have been waiting for this moment for a long time. I just want to go and party and enjoy the victory.”