Ruben Visser ensures the Master Classics of Poker title remains on Dutch soil after beating the 2011 champion, David Boyaciyan, in heads-up action, to take his lifetime live tournament earnings over the $2.4m mark. 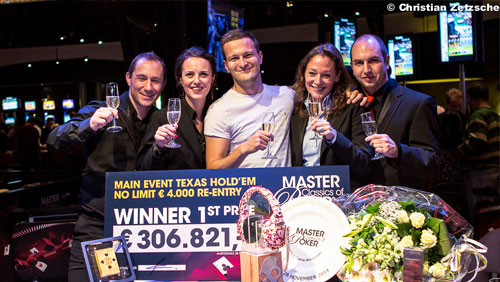 Ruben Visser has taken his lifetime live tournament earnings beyond $2.4m after victory in the 2014 Master Classic of Poker, in Amsterdam.

The Dutchman defeated the 2011 Master Classic of Poker Main Event champion, David Boyaciyan, in heads-up action, thus preventing him from becoming the first two-time champion in the event’s history.

Outside of the big three, The Master Classics is arguably one of the most exciting, and hotly anticipated events of the European winter; and there were some familiar names on display when the tournament carved out its final table.

The most obvious grin belonged to Boyaciyan. The last time he made the final table of this event he won it. He is also a fan of familiarity. A month after capturing the 2011 Master Classics title he also finished second at the European Poker Tour (EPT) in Prague, for $716,323 – one year later he would finish third in the same event for another $405,197. Not bad for a part time poker player.

There was another reason that Boyaciyan would have felt at home. In 2011, he defeated the Finnish player Jussi Nevanlinna, in heads-up action, to take the title, and Nevanlinna also made it through to the final of this one finishing in fifth place.

Stacked it may have been, but none of them could knock the former PokerStars Team Pro off his perch. Visser doesn’t travel as often he used to. Dutch tax laws putting a leash around his neck; but he once again proved how talented he is after topping the 298-player field.

It’s his second major title in two years after taking the $895,370 first prize at EPT London in Season 9. Visser secured €222,000 in this one after a three-way deal was cut once Clyde Tjauw Foe was sent to the rail.

Visser’s heads-up encounter with Boyaciyan lasted only two hands before Visser was crowned the champion. The Dutchman making it 180,000 to play, before calling a 480,000 three-bet. The play checked to the turn on [Jc] [4d] [2s] [Ks]; Boyaciyan check-called a 580,000 Visser bet. The river was the [4c]; Boyaciyan checked, Visser moved all-in, Boyaciyan called, and when the hands were overturned, Visser’s [Kd] [Qd] was too strong for the [Ax] [Jx] of his opponent.