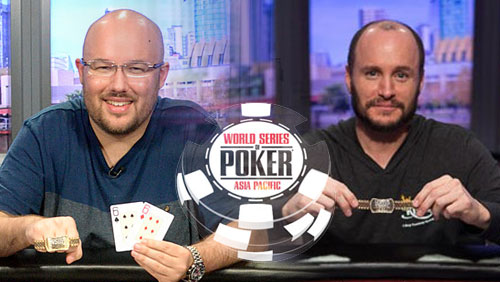 The Australians may have dominated the preliminary events, but when the big trophies were on the line, up stepped the North American’s to give World Series of Poker (WSOP) postal service a headache, after Main Event & High Roller trophies are now winging their way to America and Canada respectively.

The AU$10,000 Main Event went the way of Scott Davies, after the American defeated the young British player Jack Salter in heads-up action. It was another agonizing defeat in the final stages of a world major, for Salter, coming on the back of his defeat to Antonio Buonanno, in the heads-up stage of the European Poker Tour Grand Final in Monte Carlo earlier this year.

Salter, who also picked up a side event victory at the Aussie Millions, at the start of the year, will be bitterly disappointed at not turning his final table chip lead into the title, but he must look at what has been a career defining year for the young man and be able to hold his head high.

Davies, who finished fourth in the $10,000 WSOP Heads-Up contest, in the summer, picked up his first major piece of silverware after a cooler of a final hand. Salter calling a three-bet with [Qc] [Tc] and then smacking a [Th] [Ts] [6h] flop in the face, only for Davies to wake up with a wired pair of sixes for the flopped full house.

Davies and Salter were one-two in chips when the final table began, and it was a relatively inexperienced final table – from a live perspective – with the headline name being the 2010 WSOP Player of the Year Frank Kassela. The former two-time WSOP bracelet winner would exit in fifth place.

Jack Salter was unable to run his final table chip lead to the finishing line, but the same cannot be said of the Canadian Mike Leah.

The IveyPoker pro had over 50% of the chips in play when the final table started, and he wielded them well – eventually eliminating the New Zealander David Yan in heads-up action to take the first major title of his career.