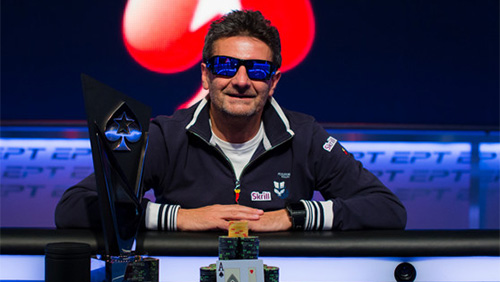 A 47-year old former clothing store owner from Italy has defeated 650-players to capture one of the most prestigious titles in world poker in what must rank as one of the longest major final tables in living memory.

Antonio Buonanno defeated the British pro Jack Salter in what can only be described as a knock-down, drag-out affair of epic proportions, after the pair duked it out for an incredible 18-hours, including 10-hours of heads-up action.

The 2013 and 2014 EPT Grand Final Main Event final tables were like chalk and cheese.

Back in 2013, Steve O’Dwyer, had to navigate his way through one of the most stacked final tables of recent history, whereas Buonanno was the only player at the 2014 final table who had even purchased the €10,600 buy-in – the other seven final tablists all reserved their seats for a total combined outlay of just €1,700 playing online at PokerStars.

But times have changed.

There is no rail of sympathy for the modern day online qualifier. There are more sharks swimming in those particular waters than plankton, never better demonstrated than the two players who started the final table in the top two positions.

Jack Salter is a young man full of confidence, after coming away from Melbourne, earlier this year, with a $100k victory in a A$5,000 Six-Max victory at the Aussie Millions just a few months the shy of a third place finish in the highly competitive United Kingdom & Ireland (UKIPT) in London for around the same amount of income.

The Londoner would start the day with the chip lead, and 500,000 chips separating him from Colombia’s number one ranked live tournament player, Mayu Roca, who first rose to prominence with a runner-up berth against Roberto Romanello, when the Welshman won his World Poker Tour (WPT) title in Bratislava.

All eight of the finalists walked away from the salubrious surroundings of Monte Carlo with career best scores etched into the digital CV of the Hendon Mob database, and Roca took fourth after being eliminated at the hands of Salter 55<QQ.

Buonanno took the tournament into the heads-up phase, after eliminating the German in third, but it would be 10-more hours, and a series of double-ups, before the Italian would finally overcome the very unfortunate Salter to take the title and first prize of €1.24m, much to the delight of his faithful wife who sat through all 300+ hands of the action.

Now that’s what I call love.