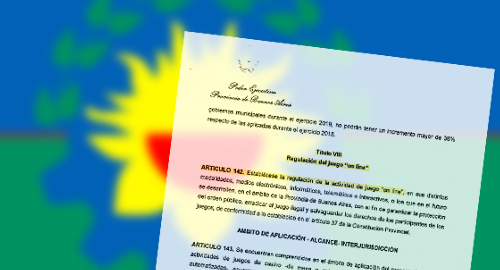 Argentina’s largest province advanced its plans to regulate gambling last week, while a different province brought its online gambling ban-hammer down on some international operators.

Late last week, legislators in Argentina’s largest province Buenos Aires received the new Budget Bill 2019, which includes plans to license and regulate online gambling in the province for the first time. Gov. María Eugenia Vidal previewed the plans earlier this month as way of exerting “greater control” over the activity.

Many of the online gambling details have yet to be hammered out, but the broad strokes aim for licensing up to seven online operators, who would be overseen by the local Instituto Provincial de Lotería y Casinos. Licenses would be valid for a maximum 15-year term and online gambling revenue would be taxed at a rate of 15%, plus a administrative payment to the regulator of no less than 2% of revenue.

Operators won’t be allowed to offer players credit and all other forms of payment will apparently have to be routed through the Bank of the City of Buenos Aires, a publicly owned institution. That squares with Vidal’s previous statement that the idea behind the online licensing scheme was to “regulate who plays, how they do it, everything is banked.”

Licensed operators will be allowed to promote their wares in unspecified forms, but all other gambling sites will be barred from advertising, sponsorship or promotion in any form, and media outlets must refuse promotional contracts with non-licensed operators.

Legislators have much debate ahead of them as they wrestle with the Budget’s other details, but the plan is for the gambling provisions to take effect on January 1, 2019.

BAN-HAMMER COMES DOWN
Meanwhile, a court in Argentina’s second-largest province of Córdoba has ordered local internet service providers to block a number of online gambling domains, including The Stars Group’s flagship brand PokerStars.com. The province has yet to take steps to regulate online gambling such as the current plans in Buenos Aires or the state-run operation in Misiones.

PokerStars had been publicly blackballed one year ago by the Lotería de Córdoba and Judge José María Romero apparently felt the local ISPs had been given more than enough time to jump into action. Local media reported that PokerStars.com was no longer accessible in the province but Stars’ mobile app was reportedly still in play.

Not to be outdone, Argentina’s national telecom watchdog ENACOM has updated its online gambling blacklist, which now contains domains associated with around 170 operators, including many of the industry’s major players.