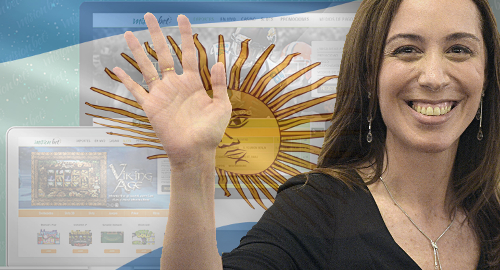 On Monday, Argentine media outlets reported that a senate committee in the province of Buenos Aires had begun studying Gov. María Eugenia Vidal’s Budget Bill 2019. Among the budget’s proposals are a new 2% tax on casino and bingo winnings that would be funneled into a “social fund.”

The government also proposed authorizing seven licenses for online gambling, which would span casino games as well as wagering on sports, races and pop culture events. The plan is to tax these operators’ online revenue at 15%, which the government expects will raise an annual ARS2.2b (US$61.8m).

The government is adamant that would-be online licensees would have to set up shop in the province, while Buenos Aires would partner with other provinces to ensure that any operator serving local punters without local authority would have their domain blocked.

The online announcement came as something of a surprise, given that Gov. Vidal (pictured) has made no secret of her disdain for the gaming industry. Vidal reiterated this stance on Monday, saying it was okay for casinos or bingo halls to set up shop in “a tourist place … but not in poor places.”

Vidal justified enabling in-home gambling access for the province’s nearly 16m residents by arguing that the government was looking for “greater control” and the means to “regulate who plays, how they do it, everything is banked” and ensuring that self-exclusion tools are readily available.

MISIONBET OFFLINE AGAIN
Meanwhile, in the province of Misiones, the on-again/off-again saga of online gambling site Misionbet appears off again, at least for the moment. The site, which is run by the the Provincial Institute of Lottery and Casinos of the State Society (IPLyC), launched in 2015 but was forced offline in May 2017 when a Buenos Aires prosecutor accused it of taking wagers from Buenos Aires residents without Buenos Aires’ permission.

The site relaunched this January after assuring authorities in other Argentine provinces that it would only take wagers from Misiones residents from hereon in. But on October 31, the site went offline, leaving behind only a splash screen saying it was “working on our platform to give you a superior proposal and continue making the game a recreational and responsible activity.”

The IPLyC issued a statement saying the site was taken offline “for reasons beyond its control, non-attributable to the IPLyC, and within the framework of its obligation to guarantee transparency and security for gamblers.”

However, local media outlet Primera Edicíon claimed that the contract between the IPLyC and its online tech supplier Integrated Systems SA had expired at the end of October and the IPLyC had ambitions to bring its technology in-house.

ENTRE RÍOS, EXIT ONLINE GAMBLING
All this online gambling talk appears to have convinced authorities in Entre Ríos province (located just north of Buenos Aires) to get in on the action. Late last month, the Institute of Financial Assistance to Social Action of Entre Ríos (IAFAS) issued a resolution banning all online gambling activity not explicitly authorized by the IAFAS.

The IAFAS has yet to craft its new online rules and regulations, which means that the IAFAS is currently the only authorized entity in town. However, the IAFAS is still working on an online gambling platform through which to offer its services, meaning Entre Ríos punters must for the moment content themselves with a single mobile lottery product. Olé.