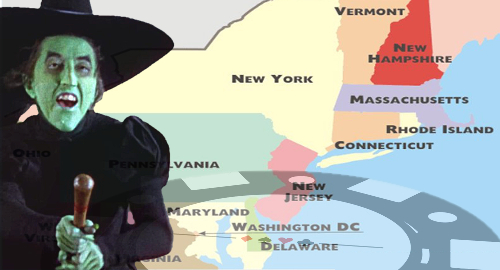 Casino gaming revenue took a hit across multiple states in the US northeast in October, opening up questions about who’s cannibalizing who.

As with September’s results, Sands Bethlehem’s gaming tables suffered a double-digit decline (-15.9%, $16.1m), while Parx Casino’s tables were up 9% to $15m, coming ever closer to finally unseating Bethlehem’s spot atop the table tallies. Parx also won the overall October crown with $47.2m vs. Bethlehem’s $38.6m.

October marked the fourth straight month of year-on-year declines, which the tribes will likely say was assisted by the August opening of MGM Resorts’ new MGM Springfield casino in Massachusetts, just across Connecticut’s northern border. The tribes have been trying to develop a joint venture casino project in northern Connecticut to mitigate the MGM threat.

But figures released this week by the Massachusetts Gaming Commission show MGM Springfield is suffering its own shortfalls. The property reported gaming revenue of $22.2m, down significantly from September’s $27m haul. The property suffered declines in both slots and table revenue, and slots handle was down nearly 13% from September.

Even Rhode Island’s new Twin River Tiverton venue wasn’t immune to the October casino curse. After earning $11.4m in its first month of operations, the Tiverton saw its October revenue fall 19%, thanks to a 23% fall in video lottery terminal proceeds

On Thursday, Atlantic City casinos reported a respectable 8% year-on-year rise in their brick-and-mortar gaming revenue but the $200.6m earned in October was down $31.4m from September’s result.

For whatever reason, the downward trend appears widespread among the region’s gaming states. Were gamblers distracted by the pre-midterm election pandemonium? Was there a particularly engrossing series that debuted on Netflix? Or maybe all those other states’ gamblers made trips to Maryland last month, as that state bucked the trend by reporting record revenue in October.