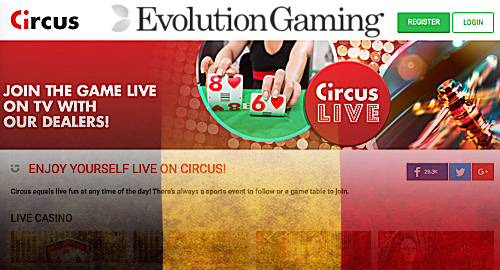 On Tuesday, Evolution announced that it had agreed to create a dedicated studio for Ardent (formerly known as Circus Group) to power a new television program offering live casino services to Belgian punters, who bet from home using their smartphones and tablets through a special game interface.

The new studio, which is set up in a third party’s existing broadcast TV facility in Brussels, features both Live Speed Baccarat and Slingshot Auto Roulette tables. The baccarat table operates during the broadcast window while the Roulette table is accessible online 24/7.

A TV presenter reportedly guides viewers between the tables – which are serviced by Flemish-speaking croupiers – and a separate sports betting area of the studio. The host apparently engages in banter with the on-set gamblers and bettors, which will likely lead to some inappropriately hilarious outbursts following either big wins or losses.

James Stern, Evolution’s land-based biz-dev director, said the company was “extremely proud” to be extending its existing relationship with Ardent, which operates two casinos and 30 smaller gaming halls in Belgium. Ardent also has a hand in three Belgian-licensed gambling sites, including Circus.be, 777.be and the locally licensed site of The Stars Group’s flagship PokerStars brand.

Evolution supplies live casino products to many of its Belgian clients from a studio in Ardent’s Casino de Spa, and Ardent’s head of gaming Jean-Christophe Choffray said his company had “total confidence” in picking Evolution for the latest evolution of its Circus Casino brand.

BELGIAN ADVERTISING RESTRICTIONS TAKE EFFECT
Ardent’s new television program arrives not long after Belgium’s tough new restrictions on gambling advertising received the royal nod on October 31. Online sportsbooks will now be restricted from running any ads during live sports events and only after 8pm during other programming.

Online casino operators and their affiliate partners have been reduced to advertising “on the website on which the exploitation of such games is authorized or by personalized advertisements.” Online operators must also cap all bonus offers at a maximum of €275 and limit weekly deposits to under €500.

Quite how Ardent’s new live casino broadcast managed to skirt Belgium’s new online casino advertising prohibition remains unclear, particularly given the rule against promoting gambling via media accessible by minors. One can argue that the wee tykes ought to be in bed by midnight, but it’s hard to see how this show will escape inevitable censure.