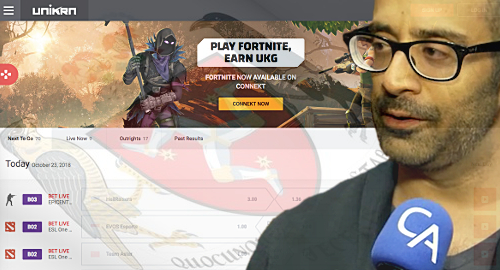 esports betting operator Unikrn has received a license for both cryptocurrency and real-money online gambling from Isle of Man gaming regulators.

On Tuesday, Unikrn CEO Rahul Sood published a Medium post celebrating his company’s “biggest launch since 2014,” aka “the world’s first and only blockchain-based live wagering backend with regulated real-money and crypto betting.”

Unikrn Limited is now listed as a license holder on the Isle of Man Gambling Supervision Commission website, adding to Unikrn’s real-money online gambling license from the Malta Gaming Authority. Unikrn also had an Australian permit but it died last December following the closure of Tabcorp’s Luxbet brand, on whose license Unikrn originally relied.

Sood (pictured) claims his company’s Unikrn Jet backend can handle 9,000 bets per second and passed a recent UK market test in which the platform took wagers on a UFC event using its proprietary UnikoinSilver token. Future wagering will be conducted via the UnikoinGold token the company launched last year.

Sood says Unikrn will offer esports ‘spectator’ betting in Europe, South America and Southeast Asia, while US esports players will be limited to betting on their own gameplay versus other players (and only with UnikoinGold) in the 41 states in which ‘skill-based betting’ won’t get you thrown in Leavenworth. There’s as yet no launch date for the US product.

Sood told VentureBeat that Unikrn had passed “a major audit” by the IOM regulators to ensure its know your customer (KYC), anti-money laundering (AML) and digital wallet practices were up to scratch. Sood emphasized that its IOM news was “not just announcing a license. This is also launching a product” that claims to have resolved blockchain issues of speed and accessibility.

Unikrn previously established a foothold in the Nevada casino market by organizing esports competitions at MGM Resorts properties and Sood hopes to soon be offering crypto-based betting at these and other US casino venues as regulations permit.

Sood told the Associated Press that Unikrn’s IOM license meant there is “finally a legitimate, regulated operator in the space that has a pretty competitive offering.” That will likely come as news to veteran online bookmaker Pinnacle, which has been leading the esports betting charge for some years now.