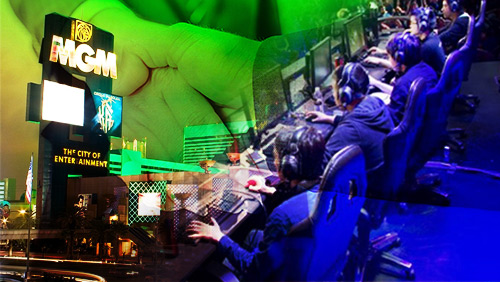 ESports betting platform Unikrn, and one of the world’s largest land-based gambling companies, MGM Resorts International, partner to offer competitive video gaming and esports competitions at the MGM Grand in a bid to attract new blood to the casino industry.

Facebook told me that my friend Gary was in a hospital recovering from spinal surgery. I had one of those internal conversations about whether to cry? I decided it was best to find out what the damage was first.

He’s been in my head all day.

I love the guy.

I think about him sitting in a wheelchair carrying a bottle of Gin full of piss. The lads are taking it in turns to be his arms and legs, pushing him in between spaces at the poker table. The bottle of piss is his card protector.

The casino needs the new school.

It’s not that they don’t love Gary, they do. He spends a lot of money in the gaff. But he’s not the future. My kid is the future. And right now, I can’t imagine my kid ever setting foot, or a wheel, in a casino in his life.

Unikrn wants to change that.

The builders of the largest esports betting Initial Coin Offering (ICO) in the short history of such things ($31m), is partnering with MGM Resorts International to pave the way for the new school.

The pairing will organise and host live competitive gaming and esports tournaments at the MGM Grand Hotel & Casino in Las Vegas. The gambling giant has been making moves in this direction for some time. In Dec 2016, they opened up an adult’s playground within an adult’s playground creating LEVEL UP, a joint where the cool cats hangout, playing VR games, pinball, and that sort of jazz.

Beginning early 2018, they will use the joint to host video game and esports tournaments on Fridays and Saturdays between 4 pm to 10 pm. Players can win cash prizes, UnikoinGold (UKG) tokens, and ‘exclusive experiences’ at select MGM Resorts.

There is no word on the types of games, but methinks they won’t be poker, roulette or slots.

We should have seen this coming.