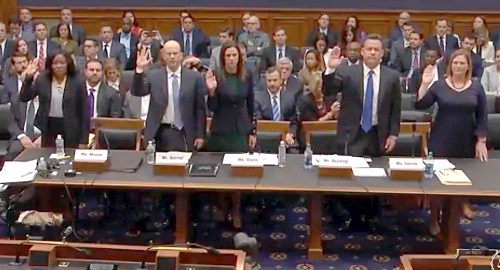 Thursday’s sports betting hearing in the US congress was not unlike The Lord of the Rings, in that the forces of darkness significantly outnumbered the wagering heroes.

Thursday saw the House of Representatives’ Judiciary Committee’s Subcommittee on Crime, Terrorism, Homeland Security, and Investigations tackle the issue of what role the federal government should – or shouldn’t – have in overseeing sports betting activity in the wake of the Supreme Court striking down the federal betting ban.

Subcommittee chair Rep. Jim Sensenbrenner (R-WI) opened the proceedings by noting the lack of any real media presence, given the hearing was taking place at the same time as the Senate’s far more consequential hearing into whether a Supreme Court nominee was a rat-bastard frat-boy rapist. 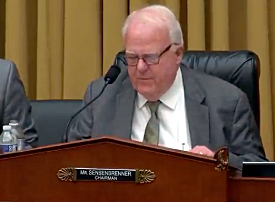 Sensenbrenner immediately copped to his impartiality on the subject of betting, saying that the “temptation is there to throw games” and unless something – exactly what went unspecified – is done, Sensenbrenner foresaw “a huge amount of trouble in the future” as legal betting spread across the land.

Next up was Rep. Bob Goodlatte (R-VI), one of the architects of the Unlawful Internet Gambling Enforcement Act (UIGEA), who rejected the view that gambling was a “victimless activity” and claimed that online gambling was “more destructive” to families than if a brick-and-mortar casino opened on the other side of their white picket fence.

Goodlatte claimed to be a supporter of state’s rights, but also claimed that state gambling regulations were impossible to enforce in this modern age of newfangled gizmos. Speaking of, Goodlatte rubbished the concept of geo-fencing, saying that the best its proponents could say was that the technology “allegedly” works.

Rep. Jerry Nadler (D-NY) concluded the committee members’ opening remarks by saying that the feds have a responsibility to ensure that sports are “free of fraud” and that the games are “on the up and up.” 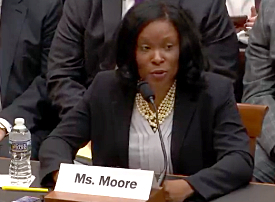 WITNESS TESTIMONY
The first of the five invited guests to speak was Jocelyn Moore, the National Football League’s VP of communications and public affairs, who warned of a state-level “regulatory race to the bottom” that practically begged for federal intervention, conveniently ignoring the fact that the NFL felt no particular urge to oversee the legal wagering going on in Nevada over these many decades.

Moore recited the NFL’s longstanding demands, including the mandatory use of league-supplied data for betting purposes, the ability to veto bookmakers offering “risky” in-play betting markets and protection of the league’s intellectual property. 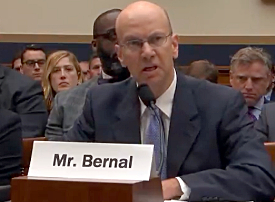 Next up was the reliably hyperbolic Les Bernal, director of Stop Predatory Gambling, who has made it his life’s mission to get state governments out of the gambling business. We’ll spare you the bulk of Bernal’s testimony, but can’t resist repeating his lines that “states are laboratories of fraud, exploitation and budgetary shell-games” and that “no illegal gambling operator is putting liens on people’s houses.” (On that last point, touché.)

Legal betting’s first backer was Sara Slane, the American Gaming Association’s senior VP of public affairs, who argued that state and tribal gaming regulators were already well equipped to adapt to include sports betting in their areas of oversight. 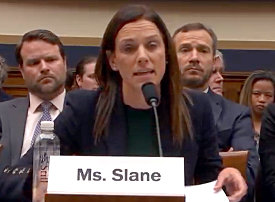 Slane noted that the feds have no input into oversight of slots, table games and other gambling products, and thus there was “no need to overcomplicate or interfere with system that is already working.”

Slane added that there was also no need for the feds to legally mandate official sports data deals between leagues and operators. If there are any data deals, they should be done between the leagues and individual operators.

Jon Bruning, a former Attorney General (Nebraska) and now a counselor at the Coalition to Stop Internet Gambling (CSIG), steered the ship back on its crazy course by claiming that the feds have “effectively abandoned” enforcement of UIGEA and demanding that the Wire Act be “restored” to its pre-2011 DOJ opinion era of zero tolerance for onine gambling. 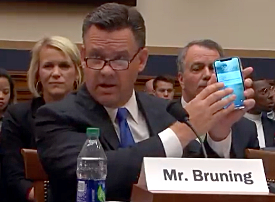 Given that CSIG is funded by Las Vegas Sands’ boss Sheldon Adelson, it was appropriate that Bruning utilized the same ‘I have a smartphone’ prop comedy so often used by Sands’ Andy Abboud at previous hearings to illustrate, er, something about online gambling being “uniquely susceptible” to criminality, public corruption and terrorism. 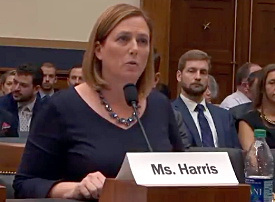 The witness testimony concluded with Becky Harris, chair of the Nevada Gaming Control Board, who noted that Nevada has been dealing with legal wagering for decades without any problems. Harris also pointed out that onerous federal regulations would only serve to drive punters to the more attractive offerings of internationally licensed online operators.

Q&A
When it came time for interaction twixt legislators and witnesses, Sensenbrenner turned Harris’ regulation comments on Slane, wondering why any bettor wouldn’t opt to wager with international sites that don’t alert the IRS regarding a punter’s tax obligations.

Slane claimed that 70% of bettors currently wagering with international operators wanted to move to US-licensed books, but they wouldn’t shift if the feds “hamstrung” US books with heavy taxes and overly restrictive regulations.

Addressing Bernal, Nadler claimed that “sociopathology” had increased wherever off-track betting was permitted, and Bernal claimed that all that was necessary was to “take the government out of” the equation, end all gambling marketing and the urge to gamble will somehow “dissipate.”

Slane rebutted this exchange, saying eliminating regulatory oversight “does not make a whole lot of sense to me” and that legal operators can work with customers to reduce problem gambling. Bruning played his one-note instrument again, saying only land-based operators can properly vet their customers, while online was “a whole different thing.”

[At this point, we pause to note the blonde woman sitting directly behind Bruning, who perpetually nodded and smiled every time Bruning spoke, much like a devout parishioner during a particularly stirring evangelical preacher’s sermon. One half expected her to jump to her feet and bellow ‘can I get an amen’ but sadly it didn’t happen.]

Rep. Goodlatte didn’t so much ask questions as continue his opening statement, saying he wanted to “modernize” the Wire Act and properly enforce UIGEA. Bruning used this moment to point out that New Jersey regulators had the nerve to issue a license to PokerStars, who he claimed were “still on the lam” from their 2011 federal indictments, despite the original owners having sold out in 2014.

Rep. Cedric Richmond (D-LA) wanted to know whether all gambling operators – online or land-based – could be restricted to accepting only debit cards, not credit cards, in order to protect citizens from going into debt. Bernal claimed “getting you to chase your losses” was actually all gambling operators’ “business model,” which we took as a ‘no’ response.

[At this point, the livestream began flashing intermittently, effectively rendering the testimony indecipherable, which we assumed was God answering the blonde woman’s prayers by blocking anyone hearing any favorable gambling references.]

When the signal resumed, Rep. Hakeem Jeffries (D-NY) expressed concern that legal wagering would pose a threat to the safety of athletes, referees and their families from bettors irate over a dropped pass or ill-timed penalty.

The NFL’s Moore somehow steered her response into another call for preserving game integrity, without acknowledging the fact that BETTING IS ALREADY TAKING PLACE and there have yet to be hordes of angry Manson Families besieging players’ homes.

Rep. Martha Roby (R-AL) wondered whether college athletes could be more susceptible to taking money in a legal betting world. Slane noted that the NCAA doesn’t pay its athletes, and appeared to suggest that colleges monitor athletes’ financial transactions to look for any activity that might indicate something untoward.

BIG FINISH
Sensenbrenner brought the festivities to a close by noting that the hearing was primarily informational, but claimed that everyone was in agreement that Congressional inaction was the “worst possible” reaction following the Supreme Court ruling, and that Congress should probably enact both “short-term and more permanent” solutions.

It remains to be seen whether there’s sufficient appetite outside the subcommittee’s narrow confines for Congress to proceed with actively regulating sports betting. Certainly, few impartial observers expect any concrete action in the dwindling days of the current legislative session, which means I wasted my time watching this fiasco, and you wasted your time reading this recap. Sorry.