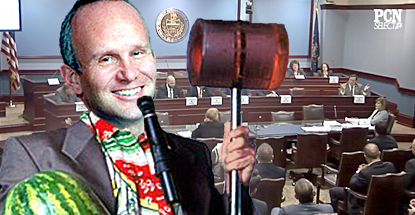 Three separate iGaming bills have been filed in Pennsylvania’s current legislative session, one poker-only and two that also allow casino games. The focus of Thursday’s get-together was the HB 649 legislation introduced by Rep. John Payne, who happens to chair the Committee.

In stark contrast to the recent federal online gambling hearing, the sane outnumbered the loonies among the testifying witnesses. Clearly, he who organizes the hearing sets the tone for the debate that follows.

One by one, reps from Caesars Entertainment, Gaming Laboratories International, GeoComply, Spectrum Gaming Group and Penn National Gaming touted both the benefits of a regulated intrastate online gambling market and the utter lack of lurid headlines emanating from the three US states in which online gambling has been authorized.

Thankfully, Las Vegas Sands’ lobbyist Andy “Dr. No” Abboud (pictured, with watermelon) was on hand to bring the batshit. But the assembled politicians weren’t shy about challenging Abboud’s rote assertions, including the claim that it is “nearly impossible to prevent minors from gambling online.”

When wannabe prop comic Abboud attempted his signature move of whipping out his smartphone and declaring that online gambling would put a casino in the pocket of “every child in this Commenwealth,” Payne cut him off, saying: “Andy, I got the cellphone idea.”

Under questioning, Abboud was forced to concede that the on-site mobile wagering technology Sands employs at its Venetian brick-and-mortar casino in Las Vegas is fully capable of identifying whether a player is attempting to gamble outside the casino’s physical boundaries. Yet Abboud insisted that similar geolocation technologies currently in use in New Jersey, Nevada and Delaware were insufficient to the task.

Abboud also protested the Pennsylvania online bills’ lack of a strict ‘bad actor’ policy. Abboud took shots at PokerStars and its new owners Amaya Gaming, claiming that they have had “significant problems with law enforcement agencies around the world.”

At this point, a true prop comic would have produced a large hook to drag himself off the stage rather than sit there stammering ineffectively. But the Committee is scheduled to hold another online gambling hearing on May 6, so plenty of time for Abboud (or his stand-in) to hone the act.

CALIFORNIA POKER HEARINGS
Meanwhile, dates have been set for similar hearings in California. On Thursday, GamblingCompliance scribe Chris Krafcik (@CKrafcik) tweeted that the first hearing, titled “Overview of Gambling in California; Legality, Authorization and Regulation.” will go down on May 20 at 1:30pm PST. A second hearing, “The Legality of Internet Poker: How Prepared Is California to Regulate It?” will commence at 1:30pm on June 24.

The hearings will be joint informational sessions by the Government Organization committees of the state Senate and Assembly. The heads of those respective committees – Sen. Isadore Hall III and Assemblyman Adam Gray – have each filed separate online poker ‘shell’ bills whose specifics remain unknown. Two other bills introduced in the current session – AB 9 and AB 167 – have failed to unite the state’s squabbling stakeholders.