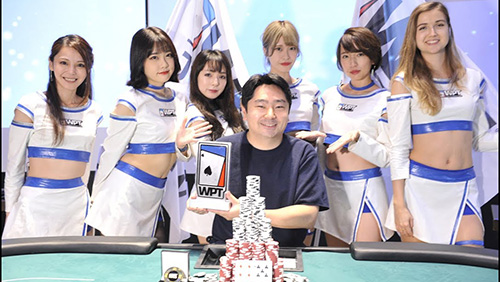 The World Poker Tour’s second visit to Japan has proven to be another success as Shingo Endo takes down the Main Event before vowing to use his WPT Global Ticket for a dream come true trip to Vegas.

I fucked that up.

I don’t know what I was thinking? I saw the ad for a Hedgehog Cafe and thought of Darjeeling, pinkie fingers, and a few hedgehogs on tap for stroking.

I didn’t expect them all to be caged in Doll’s Houses.

My daughter was going ballistic because she was too young to hold Drake (the name of ours), and Drake was going nuts trying to escape from his treadmill.

I am still suffering from PTHSD.

But apart from that, my visit to Japan was brilliant.

The train conductors bow when they enter and leave the bullet train carriages. The taxi drivers wear suits. Nobody ever blows a car horn. There are velvet covers on the streetcar seats.

If you believe the Japan National Tourism Organisation the country welcomed 16 million visitors in the first half of 2018 (up 16% YoY), and I was grateful to be one of them.

I would live there, if it weren’t for the tsunamis, earthquakes, and hedgehog cafes.

One of the things I noticed in Kyoto was the vast number of Pachinko parlours. Slot machines that look like video games. An excuse for the locals to gamble while circumventing the law (there are no real money prizes, but you can exchange your rewards for real money in the shop next door).

The bustling business told me that the Japanese like to gamble.

Earlier this year, Goldman Sachs estimated that a Japanese casino market would hit the 1.75 trillion yen (USD 15.8 billion) mark when the three proposed Integrated Resorts, as part of the newly formed casino laws, open in 2025, five years too late for the Olympic crowd. That would make the market the second highest globally behind Macau.

And that’s why the World Poker Tour (WPT) stuck parsnip fingers into the Japanese Ramen this past weekend.

Over the weekend the WPT, in conjunction with the Japan Poker Union Corporation partner, held a JYP 30,000 (USD 270) buy-in Main Event at Bane Bagus, Shibuya, Tokyo.

It’s the second time the WPT has hit Japan hard.

In Nov 2017, Eiji Kimura beat 460 entrants in the inaugural event, and this time around Shingo Endo took the top prize of a $13,000 WPT Passport credit good for any WPT event in the world valid until Dec 2019 when he defeated 322 entrants.

During his post-game interview with Royal Flush Crew member Caitlyn Howe, Endo spoke of his plans to use the Passport.

“I have never played overseas so I would like to go to Vegas and try my best. I hope the journey continues.”

The event also attracted some stardust.

These boys turned up to play.

The next stop on the WPT’s trip to Asia is WPT Korea at Paradise City Sep 21-24 where everyone can play except Koreans.