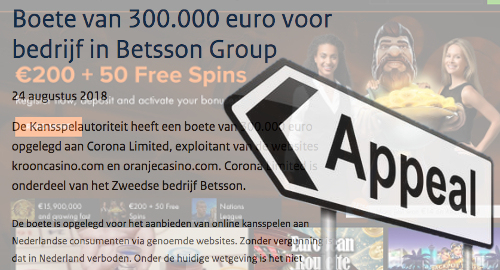 Betsson’s statement claims that Corona “maintains its prior position that its operations comply with applicable laws and regulations in the absence of an EU-compliant gambling legislation in the Netherlands.” Should the appeal fail, Corona will “refer the matter on appeal to a court of law to defend its rights.”

The KSA levied the penalty after determining that the Corona brands had violated several of its edicts, including failing to bar Dutch punters and suggesting that these customers utilize the “most popular payment method in Holland,’ aka e-commerce outfit iDEAL.

The Netherlands is in the process of formalizing a new online gambling regulatory regime, but in the meantime, Betsson has mounted several legal challenges of the KSA’s efforts to punish operators who refuse to wait for the official starting gun.

This week, Nordic investment bankers ABG Sundal Collier suggested that Betsson’s ongoing tiff with the KSA could lead to the company being “considered unsuitable for licensing” under the re-regulated market. ABG believes this would be “a very big setback,” given its estimates that the Dutch market accounts for “at least about 30%” of Betsson’s operating profit.

Betsson’s situation may not be as dire as ABG suggests, given comments made this summer by the Dutch Minister for Justice and Security Sander Dekker, who stated that operators who have earned the KSA’s wrath need not face automatic exclusion from the regulated market if they have a “reliable reputation” with Dutch punters.

ABG suggested that the KSA may ultimately choose a face-saving arrangement in which Betsson would be required to endure a brief stint in the penalty box before being allowed to apply for a new Dutch license.