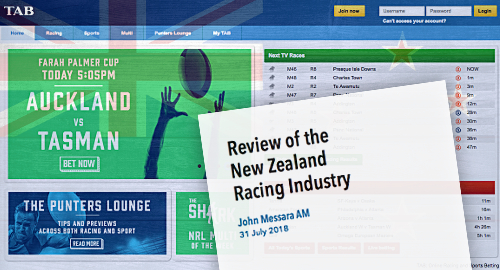 New Zealand’s race and sports betting industry is in for a shake-up after a government report recommended outsourcing the TAB’s commercial operations.

Putting aside the report’s recommendations regarding the number of racetracks and such, Messara says the current operations of the New Zealand Racing Board (NZRB) can’t deliver the funding the industry requires, while the NZRB’s TAB betting business can’t compete with major international wagering operators.

As such, Messara recommends remodeling the NZRB as Wagering NZ, a holding company for racing’s wagering, broadcasting and gaming activities.

This will involve “a full operational outsourcing of all domestic wagering, broadcast and gaming operations, to a single third-party wagering and media operator of international scale, under a long-term contract, with the NZRB holding the license.”

The TAB’s online betting site hasn’t fared well in recent years, leading the NZRB to hire tech firm OpenBet to improve its offering. Massara says the NZ$40m (US$26.3m) that has been spent so far on this new fixed-odds platform won’t be enough, and will require “further capital to enhance services and product development innovation on an ongoing basis.”

Reaction to Messara’s recommendations has been mixed, with the New Zealand Thoroughbred Racing saying that the recommendations “will create a blueprint for a thriving thoroughbred industry.” However, local sports bodies expressed fears that their TAB-derived funding could decline, and community groups were positively aghast at having to give up some of their pokies cash to the NZRB.

Australian media reported that domestic betting giant Tabcorp Holdings was an early frontrunner to win the right to become the NZRB’s new wagering and media operator.