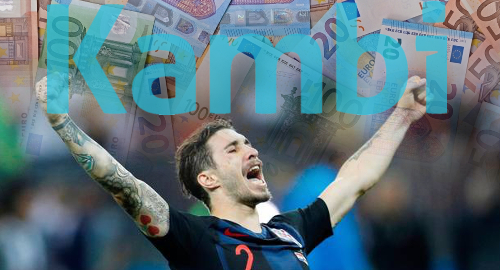 Sports betting technology provider Kambi enjoyed a solid boost from the 2018 FIFA World Cup, but warned investors that the returns from legal betting in the United States would be slow in coming.

On Wednesday, Kambi reported that its revenue in the three months ending June 30 was up 25% year-on-year to €17.6m, while operating profit hit €2.4m from just €300k in the same period last year, which suffered from a pitifully low betting margin. Similarly, after-tax profits went from €100k in Q2 2017 to €1.7m in the most recent quarter.

Kambi clients’ betting turnover hit a record €307m in Q2, and among the World Cup matches that went to extra-time, that extra time accounted for 37% of those matches’ turnover, which the company claims reflects its “market-leading extra-time offer.”

Kambi CEO Kristian Nylén said the company’s “very positive results” got a boost not only from increased World Cup wagering at its clients’ betting sites, but also from the launch of three new customers in three regulated markets – Stanleybet Romania, South Africa’s Sun International and Rush Street Interactive (RSI) in Colombia – in the space of a week prior to the World Cup kickoff.

During Q2, Kambi also announced its first US market deals with DraftKings and RSI, both of which followed the US Supreme Court’s landmark ruling striking down the federal sports betting prohibition. Nylén referred to this ruling as being of “more long-term significance” to Kambi’s future than any individual sports tournament.

Kambi has applied for betting licenses in both New Jersey and Mississippi, with plans to apply for licenses in Pennsylvania and West Virginia and (depending on how the legislative situation plays out) New York. The company will conduct a US investor roadshow in August to tout its US market potential.

Nylén said he was “excited” at the prospects of Kambi’s first US deals, but warned that “the state-by-state roll out of regulated sports betting will not happen overnight, therefore our US-facing business should be viewed in the mid-to-long-term.”