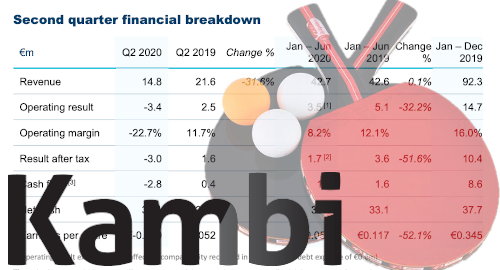 On Friday, Kambi reported revenue of €14.8m in the three months ending June 30, a nearly one-third decline from the same period last year. The company booked an operating loss of €3.4m and an after-tax loss of €3m versus a €1.6m profit in Q2 2019.

Kambi CEO Kristian Nylén said the mass cancellation of sports leading into Q2 was a “testing” period for the company but turnover began to accelerate as major leagues resumed play, leading to year-on-year operator turnover and revenue growth in the month of June.

The English Premier League’s restart fueled June’s rise, as the new staggered kick-off times led to greater media focus on each game, which in turn boosted betting turnover by around one-third from EPL games in Q1 2020.

European markets accounted for 73% of Q2 revenue, down four points year-on-year, despite US operations suffering a greater impact from COVID-19 due to the shutdown of all US sports and the closure of land-based casinos. Ping pong remained the biggest US turnover driver in Q2 but golf accounted for the quarter’s top three turnover events.

The quarter saw Kambi continue its US expansion through its partners’ launches of betting in Colorado and Illinois. Kambi also renewed its deal with Colombian operator Corredor Empresarial’s BetPlay brand.

One of Kambi’s Colorado launches was with DraftKings, a relationship that is living on borrowed time after DraftKings struck a deal to acquire Kambi rival SBTech. On Thursday, DraftKings and Kambi announced that the divorce will officially be done no later than September 30, 2021, although DraftKings is “permitted to leverage its proprietary technology prior to then.”

The companies have also agreed that DraftKings will take “additional steps” during the migration to SBTech’s platform to “safeguard Kambi intellectual property, ensuing a secure and efficient transition for both parties.”