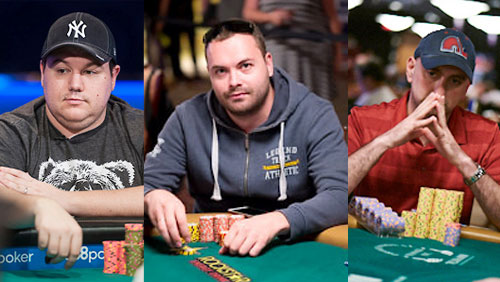 Lee Davy brings you another round-up from the World Series of Poker including a fifth bracelet win for Shaun Deeb, and maiden victories for Denis Timofeev and Yaser Al-Keliddar.

Each year, someone stands that little bit taller than everyone else stuck inside the Big Brother-style house that is the World Series of Poker (WSOP).

Last year, it was Chris “I Didn’t Do It” Ferguson.

Unless the winner of the Big One for One Drop has a bracelet in their man bag by the time the last hand is dealt, Deeb will be the only person to win two of the things after taking down Event #74: Big Blind Antes $10,000 No-Limit Hold’em 6-Handed Championship.

Deeb’s win sees him join the likes of Stu Ungar, Allen Cunningham and John Hennigan as a five-time bracelet winner, and extend his lead at the top of the WSOP Player of the Year (POY) Rankings.

When Deeb won his first sliver of gold of the summer, he defeated an old nemesis in Ben Yu, heads-up, in the $25,000 Pot-Limit Omaha High Roller earning a career-high $1.4m. Deeb had lost against Yu in the final of the $10,000 Limit 2-7 Lowball Triple Draw Championship the year prior, to sweeten the moment.

And there was a repeat meeting in the heads-up of this one with Deeb beating his 2015 $10,000 Pot-Limit Hold’em Championship rival Paul Volpe for the second time to claim the $814,179 first prize.

The event attracted 355 entrants, and 115 made it through to Day 2 with Robert Mizrachi sitting at the head of the chip counts. Mark Teltscher was looking good as was Michael Gathy and Dominik Nitsche.

At the end of the second day of action, Volpe had taken charge with 17 remaining. Deeb was looking strong, as was Mike Watson, and Teltscher was still hanging around at the top.

The Poker Gods forged a tremendous final table at the end of Day 3.

Here were the chip counts going into that one.

Volpe was making his third $10k Championship Final Table of the summer having won a bracelet in the Omaha Hi-Lo 8 or Better Championship. Romain Lewis was also making his third final table appearance after finishing third in the $3,000 Pot-Limit Omaha 6-Handed, and second in a $1,500 No-LImit Hold’em event. And, of course, there was the World Poker Tour (WPT) Champions Club member, Scott Margereson.

Here’s a quickfire look at the main moments.

Volpe extended his lead at the top with the elimination of John Andress AK>A8. Deeb came into contention when he sent Margereson packing A5>J8, after rivering the nut flush. And Lewis took out Bin Duan KJ>88 after a jack arrived on the turn. Volpe, Deeb and Lewis went at it for a considerable time, three-handed, until Volpe eventually sent the Frenchman to the rail AT>K9.

Volpe began with a large chip lead – 13.9m v 3.9m, but Deeb clawed it back, scoop by scoop, until he entered the chip lead, a position he never relinquished.

The final act saw the pair getting it in on 643 with Volpe the aggressor holding K7 for the gutshot and bluff, and Deeb calling with K4 for the middle pin. The made hand stood and Deeb took his pew for the winner’s photo.

WSOP Player of the Year Leaderboard

Two more bracelet wins to catch up on as the steam dies down on an uber-successful series.

Denis Timofeev has taken down Event #73: $1,000 Double Stack Turbo to win his first bracelet. The Russian topped a field of 1,221 entrants, including Leo Margets in heads-up action.

“The WSOP has been no good for me,” Timofeev told PokerNews after his win.

His win was only his second cash of the summer.

It was also his new personal best, beating the $161,340 he earned for finishing third in the 2017 PokerStars Championships in Panama.

Leo Margets’ six-figure score is her most significant since joining Winamax as an ambassador in February.

184 made enough money to buy a plateful of oysters including Jacob Balsiger (14th), DJ MacKinnon (20th) and Konstantin Puchkov (49th). And finally, Yaser Al-Keliddar took down Event #70: $3,000 Limit Hold’em 6-Handed, and with it, denied the Finnish legend, Juha Helppi, his first gold bracelet.

Al-Keliddar bested a field of 221 entrants to record his first bracelet win and his best WSOP performance since cashing in the 2004 Main Event for $15k. That score remained Al-Keliddar’s best for 14-years, until a few weeks ago when he finished 15/2197 in the Wynn Summer Classic $1k for $19,842.

The man is on top form.

Helppi took charge at the end of Day 2 with eight remaining. Al-Keliddar wasn’t far behind.

The first person to bust from the final table was the three-time bracelet winner, Barry Greenstein, when his pocket sixes found the task of overcoming Al-Keliddar’s pocket kings positively Herculean.

Helppi busted Mike Schneider in fifth place A8>J9, Justin Thurlow despatched Andrew Yip to the sidelines AK>K9, and Helppi took the tournament into heads-up after his A8 busted the 22 of Thurlow when the Fin hit an eight on the river.

Al-Keliddar began heads-up with a 2:1 chip lead and Helppi never had a look-in. The final hand saw then get it in with Al-Keliddar holding 44, and Helppi T4. The tens stayed in the cosy warm deck, and Al-Keliddar celebrated with his buddies on the rail.