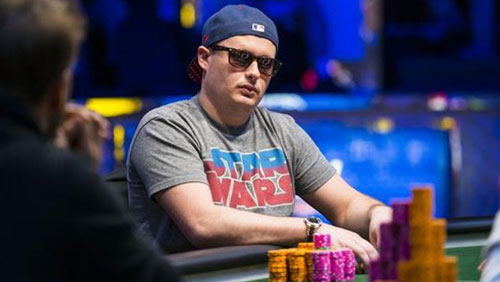 Another review from the World Series of Poker, this time focusing on Paul Volpe’s third bracelet win in Event #9: $10,000 Omaha Hi-Lo 8 or Better.

If you’re going to have an early punt on the face to replace Chris “Was That Really an Apology” Ferguson as the World Series of Poker (WSOP) Player of the Year (POY) look no further than Paul Volpe.

Volpe has never spat into my dictaphone.

I don’t know the man.

But he doesn’t strike me as the titles type. I see a predator. The kind of guy who goes toe-to-toe with a Polar Bear emerging with its pelt turned into a pair of slippers.

The winner of the WSOP POY needs to be someone who can beat all of the games, and Volpe can do that. Plus, he has begun the series like a beetroot hitting the blades of a Nutribullet – a splash of colour that you’re not going to forget.

And then he went and did this.

Event #9: $10,000 Omaha Hi-Lo 8 or Better attracted 169 entrants, a 9% increase on last year’s event won by Abe Mosseri. $1,588,600 would go into the prize pool, and by the end of Day 1, Chris Bjorin marched in front of 75 players each holding a plastic bag containing chips. Volpe was somewhere in the middle.

By the end of Day 2, Eli Elezra emerged as a serious contender for his fourth bracelet when he topped an impressive list of 22 players with Volpe once again in the middle of the pack. Elezra still had the lead coming into the final table. Volpe began in third. Adam Coats was the piggy in that middle.

It was an incredible final table with 11 WSOP bracelet worth of experience in action, but it was those three: Elezra, Coats and Volpe who would stick around until the bitter end.

Elezra took care of Coats when he rivered Broadway to beat his competitors two pairs of aces and tens, but Volpe still began heads-up with a 4,965,000 v 3,485,000 chip lead.

And then this happened.

“He ran like God,” Elezra told a PokerNews reporter after a short and shrift heads-up encounter where the Israeli didn’t win a pot of note.

It was hit after hit.

“A lot of people with cards like me would have won this tournament,” said a modest Volpe after flopping a straight to beat the WSOP legend.

The $417,921 prize is Volpe’s third most significant of his career. The $651,170 he received for finishing runner-up to Paul Klann in the 2013 World Poker Tour LA Poker Classic remains his best. Victory over Elzezra was Volpe’s ninth career title, and he has amassed more than $7.2m in lifetime earnings.

26 people got paid and amongst them were:

Volpe now trails Elio Fox at the top of the 2018 WSOP Player of the year standings:

Here are the top five.