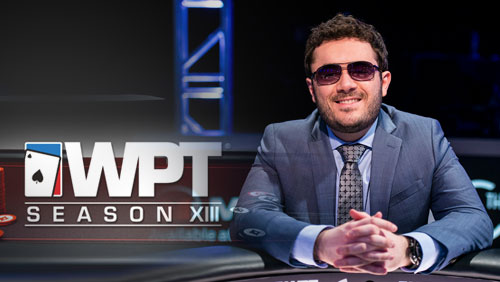 Anthony Zinno will go into the World Series of Poker (WSOP) on a high, after being crowned the World Poker Tour (WPT) Season XIII Player of the Year (POY) at The Borgata Hotel Casino & Spa, Atlantic City.

The three-time WPT Champion entered the WPT Championships with 2,056.15 points, and only Darren Elias, who was sitting second with 1,777.85 points, had the ability to catch him in the final event of the season. Elias made it through to Day 2, but busted early, calling time on the POY race.

It was a fantastic year for both competitors. Elias created a WPT record by cashing eight times, and that included back-to-back WPT Main Event titles, with victory at the WPT Borgata Poker Open in September, and the WPT Caribbean stop in November. He took over a million dollars from the tour this season, and in any other year, his performances would have secured the POY award with ease.

But this wasn’t any other year.

He won the Fallsview Poker Classic in February, and a few weeks later won back-to-back titles after victory at the WPT LA Poker Classic. He cashed in five other Main Events, won the WPT Bay 101 Shooting Stars High Roller, and finished runner-up in a highly competitive side event at the recent WPT Seminole Hard Rock Poker Showdown. Zinno took over $1.4m away from the WPT tables this year, and joined an elite band of players with three WPT Main Event titles.

The WPT has rewarded Zinno by handing him a specially designed Hublot watch, and hotel accommodations and ground transport to every WPT event he enters in Season XIV.

Ryan Smith Wins the WPTDeepstacks Player of the Year Award

He won the award after totaling 101.72 points courtesy of a victory in the Main Event at Casino Yellowhead, and two other main event cashes. He was rewarded with a 2015 WPTDeepstacks sponsorship package, including $5,000 towards WPTDeepstacks buy-ins, hotel accommodation and airfare, a special feature on WPTDeepstacks.com, a range of WPTDeepstacks goodies, a specially designed poker table provided by Off Tilt Poker Tables, and a seat at the $15,400 WPT World Championships, which he was unable to turn into a cash.