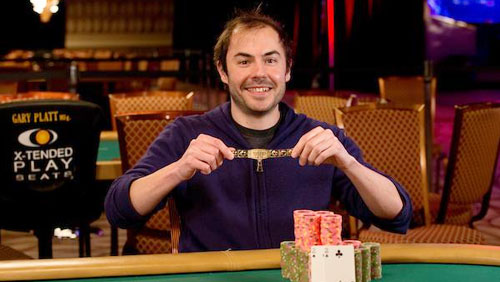 The World Series of Poker has opened in style with Elio Fox taking down Event #2 $10,000 No-Limit Hold’em Super Turbo Bounty, and there are 14 players left in the Casino Employee event going into Day 2.

I was there, in Cannes, when Elio Fox won his first gold bracelet. He chose one hell of an event to secure his first sliver of gold, facing the likes of Jake Cody, Chris Moorman and Patrik Antonius, and now he has two after wading through an equally star-studded field.

Fox outlasted 243 entrants to win the first of what I believe will be many $10,000 No-Limit Hold’em Super Turbo Bounty events in the future. The High Rollers will lap these one-dayers up until the cows come home.

Paul Volpe is a two-time bracelet winner, Joe Cada also has two (including the Main Event bracelet), Alex Foxen is one of the most in-form high rollers on the scene, David Eldridge recently won the partypoker MILLIONS High Roller in Montreal, and Taylor Black won the Main Event in the same festival.

Fox would successfully manoeuvre his way through the lot before taking on Adam Adler, heads-up, with a 7:1 chip lead. Adler did double up once, but Fox eventually took it down when his deuces beat AT in a race, turning a set for good measure.

The event was hugely successful with the likes of Phil Hellmuth, Global Poker Index #1 Stephen Chidwick, and the reigning WSOP Player of the Year, Chris Ferguson all taking part.

Other Charlie Chaplin’s twiddling a stick in the final acts of this one were Bryn Kenney (10th), Justin Young (13th) and John Racener (16th).

The second World Series of Poker (WSOP) gold bracelet of the summer won’t go to a big money superstar (not after Ty Stewart fell in 52nd place), instead it will go to one of the many casino employees that qualify for the opening $565 buy-in event.

This year, the opening event of the iconic series dragged in 566 entrants, a 14% dip on last year’s numbers when Bryan Hollis defeated a field of 651 entrants to bank the $68,817 first prize.

The table dealer from the Pechanga Resort and Casino in Southern California leads the final 14 players heading into Day 2. Sanders has $14k in lifetime earnings, and finished 28th in this event back in 2009, the same year he won the Employee Event at the WPT Legends of Poker at the Bicycle Casino for $3,258, his record score to date.

The final 14 return at noon on Friday to play down to a winner.

Here are the top 5 chip counts and payouts