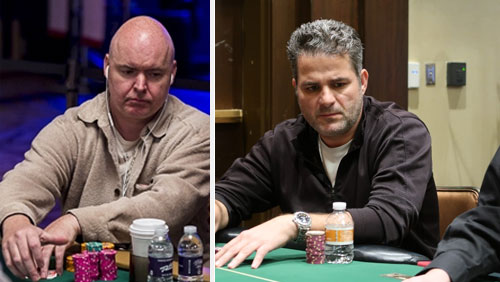 Another review from the World Series of Poker, this time focusing on John Hennigan’s fifth bracelet victory in the $10,000 H.O.R.S.E Championship, and a lovely win for Filippos Stavrakis in the $1,000 Pot-Limit Omaha.

Long before I was vegan, I loved a prime piece of steak. Once, when eating in this swanky meat joint, I ordered a 20oz T-Bone steak, drooling like a dog belonging to a man called Pavlov.

When it arrived, I looked at it, and thought, “What the fuck is this?” It was all bone and no meat. I was expecting a horse’s thigh.

I called the waiter over, “What’s this?”

“But it’s all bone,” I said pointing at it with my fork.

“I can assure you that it’s 20oz,” said the waiter making strange orchestral movements with his wrists.

I cut around the meat, separated it from the bone, and pointed to the bone, “That, is 18oz. The meat is 2oz. I want my money back.”

The man paid me but never asked if I wanted anything else. An outrage. I would out the restaurant, right here, right now, but I was so drunk I can’t remember the name.

When it comes to a prime piece of World Series of Poker (WSOP) meat, John Hennigan is 100% prime cut, juicy goodness. When he sits down at the table, there is no fat, no bone, only sizzling superiority, and just like I once did, Hennigan loves a piece of H.O.R.S.E.

Leading the final table was Iraj Parvizi, and it was clear as rat poison, that Parvizi rode his H.O.R.S.E very differently to everyone else. His style was so tilting for Hennigan, the champ spoke after the event of how it made him ‘fall apart’ before thanking the deck for coming to his rescue.

Hennigan began heads-up with the chip lead over the former champion, Bakes, and he never gave it up despite Bakes doubling a few times.

Hennigan has now won nine titles in his career, including five bracelets.

The H.O.R.S.E win was his fourth cash of the series, and he has made three final tables, finishing seventh in both the $1,500 Dealer’s Choice and $10,000 No-Limit 2-7 Lowball Draw Championship.

25 people were able to dry out sweaty handshakes by making it into the money including the four-time bracelet winner, Robert Mizrachi (12th), the three-time WPT Champ Anthony Zinno (13th), and the former WSOP Player of the Year Mike Gorodinsky (19th).

Hennigan’s victory means he trails Elio Fox in the Player of the Year race.

WSOP Player of the Year Rankings

From a man who wins WSOP bracelets with the same frequency as Daniel Negreanu’s chef chops up cucumbers to a man who only dreams of such things.

Filippos Stavrakis has defeated 986 entrants to win the $169,842 first prize in Event #26: $1,000 Pot-Limit Omaha, and immediately dedicated the win to his brother Jimmy, who died prematurely a few years back.

“I always said that if I were fortunate enough to win a bracelet, I would dedicate it to him,” Stavrakis told PokerNews after his win. “It felt like he was with me all day.”

Stavrakis experienced both ends of the spectrum during the final day. He came into the last day as the chip leader with 14 remaining and was the shortest stack with only a quartet left battling it out for the bracelet.

Heads-up was between Stavrakis and Jordan Siegel after the Brazilian superstar, Felipe Ramos, left the party in third place. Stavrakis enjoyed a 2:1 chip lead after taking care of Neymar’s buddy and made short work of Siegel in a duel that contained fewer hands than I have fingers.

146 players ended up with olive meat and not the seeds including one of the best players never to win a bracelet in Shannon Shorr (29th), European Poker Tour (EPT) Main Event winner and bracelet holder, Martin Finger (59th), and the two-time bracelet winner John Kabbaj (65th).