John Hennigan and Michael Gathy could not have had more contrasting times at the 47th Annual World Series of Poker (WSOP). The American came into the series as one of the best card for card players in the world, but going into Event #47: $10,000 2-7 Triple Draw Lowball (Limit) Championship he was still searching for his first cash. 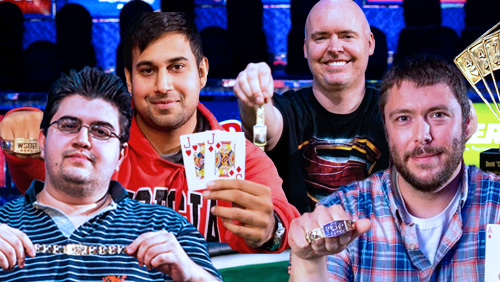 In contrast, Gathy was blasting people into the stratosphere with some magical poker. The Belgian had cashed three times, finished runner-up to Rep Porter in the $1,500 Seven Card Razz, and won his third career bracelet after beating Adrien Allain in the $5,000 No-Limit Hold’em Six-Handed competition.

So when the pair clashed heads-up for the bracelet in Event #47, it was a tough one to call. Would the experience of Hennigan be enough to win his fourth bracelet, or would that fourth bracelet go to the man on a roll?

It could have gone either way.

After Hennigan had eliminated the dangerous JC Tran in third, he took an almost 4:1 chip lead into his war with Gathy. The Belgian won the first few hands; Hennigan knocked him back down a peg or two. Then with Gathy down to 10 big blinds he mounted a comeback to take the chip lead.

Most men would have crumbled at that point, but Hennigan is not like ‘most’ men. Gathy would only win one more hand after taking charge. The rest of them went Hennigan’s way, and it was the American and not the Belgian, who was holding up bracelet #4 in front of a very tired camera crew.

Phil Hellmuth is a little bit behind the pace this year. By this time last year Hellmuth had cashed in five events, won his record-breaking 14th bracelet, and banked over a million dollars.

Maybe that’s about to change?

Hellmuth has just made his first final table of the series in the $5,000 buy-in No-Limit Hold’em (30-Minute Levels) event. He didn’t win it. That honour went to Ankush Mandavia. However, Hellmuth’s 8th place finish shows that his GPS has received a new set of batteries. The most celebrated WSOP champion in history exited in 8th place when his [Ah] [4s] ran into the [Ad] [Kh] of Sean Getzwiller.

The final table also saw another deep run from Kyle Julius. The expectant father is trying to squeeze in as much WSOP action as he can before his life is turned upside down. It was his fourth cash of the summer, and his second final table. He was unable to repeat his feat of 3-weeks ago when he topped a field of 667 players to win his first bracelet in the $1,000 No-Limit Top Up Turbo event, but he can’t grumble over what was another great run.

He was the chip leader at the end of Day 1.

He was the chip leader at the end of Day 2.

He was the only player with any chips at the end of Day 3.

Cash game player Loren Klein has destroyed a 919 player field in the $1,500 No-Limit Hold’em/Pot-Limit Omaha mixed event and picked up $241,427 in the process.

So what turns Klein on?

Is it the bracelets?

Is it the cash?

Is it the prestige?

The 34-year old Nevadan has now cashed 23 times at the WSOP and made five final tables. His previous best was in 2010 when he finished runner-up to Miguel Proulx in a $2,500 Pot-Limit Omaha event.

Steve Wolansky has captured his second career bracelet after beating Chinese-born Wenlong Jin in Event #44: $1,000 No-Limit Hold’em. The Floridian pro defeated a field of 2,076 players and earned $298,849 for his troubles.

Wolansky was making his third WSOP final table appearance, and each time he has taken a seat, he has reached heads-up. He was runner up to Michael Malm in the Eight Game Mix in 2013, and he beat Joseph Cheong to win the $1,500 No-Limit 2-7 Draw Lowball event in 2014.

Now that’s a man with a diverse set of poker skills in his locker.

Wolansky had to do it the hard way. It took him over three hours to eliminate Jin, and had to come from a 3:1 chip deficit to take the bracelet.

Phil Laak 23rd, Kevin Eyster 35th, and Jennifer Shahade 55th were the biggest names at the deeper end of the chip counts. Chris Ferguson cashed for the 7th time at the WSOP finishing in 141st place.