Home / Poker / Shannon Shorr: Finding Vulnerability in the Midst of a Downswing 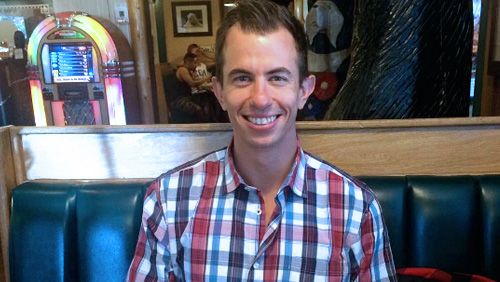 Lee Davy talks to Shannon Shorr about life within the biggest downswing of his career; how it has affected his behaviour, his plans for the future, and much more.

Poker can catapult you into Edvard Munch’s The Scream. It can be a lonely place, especially during a downswing, where there is a particular finger down the blackboard type trope to it. It punishes resistors and those that flow with equal fervour. It fucks you up.

Shannon Shorr, 31, is feeling like that as he embarks on his 11th journey along the treacherous mountain pass that is the World Series Poker (WSOP) Main Event. The greatest tournament in the world means something different to everyone.

What does it mean to Shannon Shorr?

“I am excited about another opportunity. I am thankful for everything this game has given me.”


An opportunity to do what?

“I am on the biggest downswing of my career. There has been a lot of dark times this summer. At some point, it starts to get to you.”


Why is it getting to him?

“I have been working harder on my game than at any other time in my career. I have not been getting the results that I believe is deserving of that hard work. I have found that very tough to deal with.”

A few weeks ago I interviewed the WSOP bracelet winner Jackie Glazier after she had left her sponsor 888Poker and decided to take a break from the game. Glazier’s story was similar to Shorr’s in as much as she had not seen the results after applying herself with more dedication than ever.

Do the Anders Ericsson 10,000 hours of deliberate practice not apply to poker because of variance?

“Variance is tough, but you have to grab the handlebars and ride through it. I have been playing for 10-years now, so I should be able to handle it. In the tournament world you have to look at variance over a 20-year span to weed out the very best players, and even then it may not be a big enough sample size.”


It’s not often that we get a peek inside the mind of a poker player on a downswing. Losing tournaments, money, and respect is not something that people care to share. For Shorr, it’s all part of the learning process.

“I have been taking the tournament losses harder than at any other time in my life. I am embarrassed at some of the ways I have responded to it at times. It must be an entitlement thing. I have always had it. I have been fortunate never to go through a bad run. I have never had to face adversity. I am disappointed with the way I have handled myself at the table, in particular with how much negative energy has surrounded me, but know I will come back stronger. I feel good about this Main Event.”


Shorr’s girlfriend, Justine Joy accompanied him to the Day 1A rail. An apt name given Shorr’s situation. There is an adage of never taking your work home with you. I ask Shorr how difficult it must be to feel so low at the table and then amputate that part of your life when it comes to your existence away from the tables, especially the relationships of those closest to you.

“My girlfriend {Justine} has been amazing this summer. Having that positive energy in your life is awesome. She has been helping me a lot, and when I sit down to play, I am in a great mindset because of her. It’s the night after busting that’s tough. But she has made a significant impact on my game.”


The conversation flows into the difficulty some poker players can have when they enter relationships with partners who don’t understand the variance in poker. Shorr doesn’t have that problem.

“Having her out here this summer for the first time she has seen the worse that can happen in tournament poker. It’s a vicious business. So yeah, she knows how the industry works from the inside now because she isn’t from the industry and it’s awesome for our relationship. As a single guy I always had so much anxiety about what role women would play in my life, and now I love my relationship with her. It’s a little arrogant and entitled to expect all aspects of my life to line up perfectly at the same time. I am embarrassed at the way I have acted at times, but I can only learn from that and hopefully win that Main Event.”


There is that word again.

I have never heard Shorr be so open and vulnerable, and it can only be a good thing. I mention a dinner I had with the Italian poker player Andrea Dato and the Argentinean Nacho Barbero. Dato admitted changing certain aspects of hands when talking to his peers because he was fearful of vulnerability. Barbero thought he was crackers. Shorr understands thoroughly.

“Vulnerability is something I have struggled with personally and in my game. I have changed aspects of hands before. It’s something that’s not talked about, but it’s a reality. To get better, as hard as it is to hear, you need to be told that you are fucking up your game or some part of your life.”


I wonder how much outside influences affect his game such as being on every media person’s list as one of the greatest players in the game never to win a WSOP bracelet.

“It would have bothered me a few years ago. Winning poker tournaments is hard. I think I have 60 WSOP cashes, ten final tables, but I haven’t run well down the stretch of these things. I have made tons of mistakes as well. Playing tournaments is hard. I play mainly NLHE tournaments with 1,500 – 2,000 fields. I know I will win a bracelet someday, or maybe I won’t because of this variance?”


Does he have a big ego?

Is there a need to be seen as a winner?

“Honestly, at this point in my life, I prefer the anonymity. 4-5 years ago I would have wanted the limelight. Often, you think you may be a better player than those who are winning, but that’s insecurity in me. Now I try to be happy for everyone and their success. But it’s hard when you are working so hard. Running bad in poker is the only time in my life when I am closed off and go into my shell. And it’s one of the reasons I won’t be doing this my whole life. ”

“I won’t be doing this my whole life.”

And I get where he is coming from entirely. You have to be happy doing what you do for a living. Otherwise, you are making a dying. But somehow I can’t see Shorr walking away from this business until he has accomplished a few goals. And one of them must be to win a WSOP bracelet.

“I would have to leave on a high note. It would feel like I was quitting otherwise, and I know I have what it takes, and I enjoy the learning process. I am not in a position to complain about my life. I ran very well in the early years, and I was never in a tough position financially.”


And what if the unthinkable happens?

“I think about that question all of the time. It’s partly the reason I have been working my butt off. I spend time with friends, family; girlfriend and work on my poker game. Everyone must be challenged with this question when going through a downswing. Every spot that comes up that you are unsure about you ask people. I am a lot more vulnerable with people than I have been before. Your confidence just gets fucked with.

“Being in the moment can hurt, but I think I am very good at that. Perhaps, I am a masochist because although I am feeling pain, I am enjoying it in a way. I am trying to go for it during each tournament. I am making the best decisions that I can. When I finally bink one of these things it’s going to feel so great because I have worked so hard to keep things together during such a challenging time.”


Shorr finished Day 1A of his 11th WSOP Main Event with 125,900 chips and the dream of redemption well and truly alive.