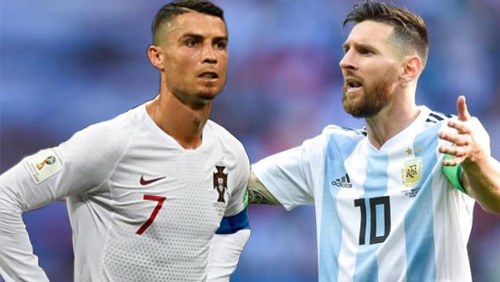 Another round-up from the 2018 World Cup in Russia including a fond farewell to the games modern icons Lionel Messi and Cristiano Ronaldo as Argentina and Portugal crash out of the competition.

When it comes to the vote for the man who graced a football field with more panache than any other, my boy used to toss a coin.

Two men who are leaving Russia far too early.

You will have noticed the past tense vernacular in the opening sentence. It’s not atypical, typing too quickly, make a mess, mistake of mine.

I showed my boy video footage of Diego Maradona, and he put his coin in his pocket.

My boy knew with certainty who the best of the best was.

Many things make Maradona a likely candidate for the greatest footballer that ever lived, but the overriding one was his ability to drag ten average Argentinean footballers to a World Cup win in 1986.

We could never see Messi on par with Maradona without a World Cup moment like 1986.

He will be 35 by the time we watch people melt on pitches in Qatar. The Barcelona ace has retired from international football before. I expect him to do it again.

His chance has gone.

The pigeons will continue to shit on the head of statues of Maradona.

The Route to the Round of 16

France v Argentina was the standout tie of the Round of 16, and the world got to sample its wares first.

The French meandered through their group with the handbrake on, beating Peru and Australia, before a goalless draw with Denmark led to a last 16 showdown with Messi and co.

Argentina, on the other hand, has been a mess.

Media reports suggested that Jorge Sampaoli was no more than an overactive bystander as Messi and Javier Mascherano picked the side to face Nigeria in their crucial final group game after a draw against Iceland and a catastrophic defeat at the hands of Croatia.

The handbrake was off, but this side wasn’t moving very well at all.

The Game of the Tournament Thus Far

The French began brightest with Antoine Griezmann striking the bar with a sweet free kick. Then with 13-minutes on the clock, Kylian Mbappe showed the Argentine players a clean set of heels, as he moved the ball from the edge of his box to the heart of his opponent’s.

At the last moment, Mbappe over hit the ball. I don’t care how quick he is; he was never going to catch it. Manchester United’s Marcus Rojo, the hero of the Nigeria win, turned villain, when he had a brain fart, deciding to haul Mbappe to the ground in a completely unnecessary foul.

The replays showed clearly that the first foul happened outside of the box, but nobody except me seems to have noticed it, so maybe I dreamt it. Anyhow, Griezmann stepped up to put the ball away, and given that France had never lost a competitive game in which the Atletico Madrid ace had scored, the early omens were healthy.

But then things changed, and you had to say it was against the run of play. With the half-time interval approaching, Angel Di María picked up the ball 30-yards from goal and swung a mighty left foot to send the ball screaming into the top corner. It was the furthest successful strike of this tournament and a peach of a goal.

Three minutes after the break, and Argentina were ahead, albeit in fortunate circumstances. The French failed to clear their lines after a corner kick. Messi picked the ball up in the right-hand side of the penalty area. The little magician swivelled and shot, and it struck Gabriel Mercado and ended up in the net.

Argentina had taken the lead.

It lasted for 15-minutes.

Lucas Hernandez romped down the left-hand side of the penalty area, cut the ball across the box, and it seemed like it had gone too far until the cherubic-looking Benjamin Pavard smashed the ball into the net with the outside of his right foot for his first goal for France.

And then we had the Kylian Mbappe show.

On 64-minutes the French teenage sensation picked up the ball eight yards from goal, edged it past an Argentine defender, and finished sweetly. Four minutes passed, and a second for Mbappe, making him the first teenager to score a brace since Pele in 1958 when he connected with a touch by Olivier Giroud to side-foot the ball into the net.

Argentina made it a frantic final minute when substitute Sergio Aguero got on the end of a Messi cross to head home three-minutes into injury time, but time had run out.

The win sees France join Brazil as the new joint-favourites to win the World Cup.

The disappointing thing about Argentina’s exit was the lacklustre display from their iconic talisman, and Portugal suffered the same fate, with a ghost-like performance for their leading man. Portugal is a one-man team, and when that one man goes missing, they struggle badly.

The Portuguese had to wait until the final group game to make the Round of 16 after a draw against Spain, and a win against Iran meant they needed at least a point against a tough Morroco side to go through – they got all three. Uruguay had a much easier time of things beating Egypt, Saudi Arabia and the hosts Russia without conceding a goal in qualifying.

The South American side hit the back of the net early. Edison Cavani finished off one of the best one-two moves you will see this tournament when he swept the ball from one flank to the next, ran into the box to connect to a Luis Suarez cross with a chiselled cheekbone. It was Cavani’s 44th international goal, and Suarez had handed him 12 of them on a plate.

Portugal equalised after the break when Pepe found space in the penalty area to head home from a corner. But Uruguay retook the lead with 30-minutes remaining after Cavani finished off a counter-attack with an excellent strike against the run of play.

Portugal controlled the football in the second half, but never threatened the Uruguay goal. One of the most frustrating things to see, particularly after Pepe’s goal, was how wasteful they were with corner kicks, deciding to play the ball backwards instead of thrashing it into the jukebox.

It was a poor display by the man, who allowed his frustrations to boil over, getting into the face of the referee in the dying minutes to contest a free kick that never was.

Ronaldo will be 37 by the time Qatar appears on the horizon.

Like Messi, I don’t think Ronaldo will make it, do you?

Uruguay face the French in the Quarter Finals. The one blot on their copybook is an injury to their match-winner Edison Cavani. Without him, I don’t think Uruguay stand a chance against an in-form French side.

With Ronaldo out of the competition, it’s time to take a fresh look at the odds for the Golden Boot.