Another round-up from the World Cup in Russia as Argentina leave it late to reach the last 16, and Iceland goes home with heads held high despite losing to Croatia in their final group match.

If we are to believe news reports, and the Argentina players had wrested control away from the coach Jorge Sampaoli, then can someone explain why they waited until the 80th minute to put Sergio Aguero onto the pitch in a game they needed to win and were drawing 1-1.

Evidently, the Manchester City striker’s only role is to bring the dressing room mixtape.

Argentina, made the knockout stages of the 2018 World Cup by the skin of their 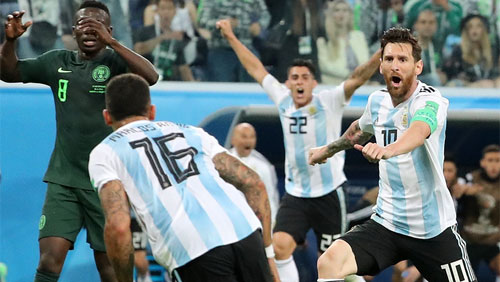 teeth, after a late win against Nigeria in St Petersburg last night.

Argentina was a team in turmoil after an embarrassing draw with Iceland, and a shameful 3-0 stuffing at the feet of Croatia. Nigeria was on the ascendancy after beating Iceland.

The winner would join Croatia in the next round.

A draw would do for Nigeria if Iceland failed to beat Croatia.

Messi told his teammates before the game that he would score, and in the 14th minute he lived up to his word. Ever Banega found the little man with an exquisite ball from the halfway line. Messi, running at pace, brought the ball down on his left thigh, cushioned it with his right foot, before using the same wand to stick it into the back of the net.

It was vintage Messi.

Messi could have had a second only to see his free-kick tipped onto the post by the Nigerian goalkeeper, but they looked out of breath and out of ideas.

Then in the 51st minute, disaster struck, when the supposed leader of the team, Javier Mascherano, naively held Leon Balogun in the area, and after consulting VAR the referee gave a soft penalty. Up stepped Victor Moses and suddenly Argentina was in big trouble.

At 30 years and 189 days, this is the oldest Argentinean side to ever play in a World Cup. Fortunately, they are still fit. With time running out, Marco Rojo connected with a Gabriel Mercado cross to volley home the winner.

What a pile up.

Argentina held on until the bitter end, but Iceland could still depose them if they had beaten Croatia in Rostov-on-Don, but as you know, from the previous writing here, that didn’t happen.

They may only have a population of 300,000 people, but after their heroics during the 2016 European Championships, this team will leave Russia tinged with disappointment.

Only Ivan Perisic and Luka Modric kept their place from the Croatia side that stuffed Argentina, but they still took the lead after Milan Badelj arrived in the box to finish an excellent move in the 53rd minute.

Sverrir Ingason hit the bar before Gylffi Sigurdsson scored from the penalty spot after Dejan Lovren had handled in the box. But Iceland, who came into this competition as the lowest scoring European side, couldn’t find the net for the second time.

As Iceland poured forward in desperation, Perisic found space on the left-hand side of the box, to slam home the winner in the 90th minute to break those ice cold hearts.

To Win The World Cup