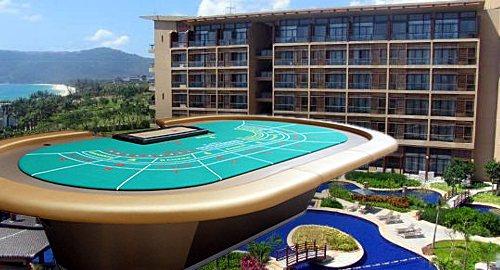 Those ‘cashless casinos’ on China’s island province of Hainan are reportedly gearing up for a comeback, although Beijing may yet have other plans.

On Monday, Bloomberg reported that “at least five” Chinese-owned resorts on Hainan were prepping “entertainment bars” featuring casino-like games that pay out winnings in credits that could only be redeemed for non-gaming amenities at the resorts.

Similar ‘cashless’ gaming parlors were launched on Hainan around five years ago, but these were quickly shut down after international media reports brought them mainstream attention. With the exception of state-run lotteries, casinos in Macau and the Hong Kong Jockey Club, gambling remains illegal in China.

In February, Beijing announced plans to allow Hainan to offer horseracing (but not race betting) and expanded lottery operations as part of a plan to boost tourism. While analysts were quick to dismiss the likelihood of legalized casinos on the island, a local court recently overturned a ruling against a cashless casino, a development that other analysts suggested would not have transpired without Beijing’s approval.

Monday’s Bloomberg report quoted iGamiX consultant Ben Lee, who has longstanding relationships with Hainan resort operators, saying the firms were “positively excited about the changes that appear to be coming through soon.”

Other Bloomberg sources claimed the resorts were contacting suppliers of baccarat tables and drawing up blueprints to convert ballrooms into gaming floors. The resort owners reportedly had informal talks with Hainan officials in recent months regarding the potential changes.

The expectation is that, should Hainan’s cashless casinos be allowed to proceed and eventually given the approval to convert to real-money play, they would remain small-stakes affairs catering to mass market tourists. The theory appears to be that keeping stakes small would alleviate concerns over money laundering and capital flight that plague Macau’s casino industry.

However, it was only last month that Liu Cigui, Secretary of the Hainan Provincial Committee of the Communist Party of China, said it was imperative that Hainan steer clear of “prostitution, gaming and drug dealing,” so who knows what’s what anymore.

Meanwhile, the expanded lottery concept is already being tested by a company with ties to provincial and central governments. The Hainan International Tourism Island Sports and Gaming Entertainment Project is an online version of the cashless casinos’ points-based gaming model and allows punters to buy wagering credits via AliPay or WePay payment processing services.