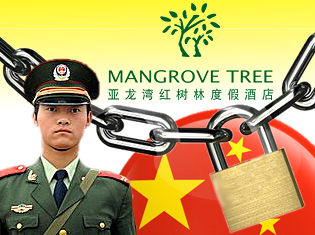 Police in China’s southwestern province of Guizhou haven’t yet caught the lead suspect in the bombing of an illegal gambling den that killed 15 people earlier this month, but they have continued their crackdown on similar establishments. Last week saw local authorities destroy over 1k pieces of gambling equipment seized in recent raids, including mahjong and slot machines. On Sunday, the Ministry of Public Security announced that police across China had detained over 5,300 suspects for alleged gambling offenses since January 1.

A little south of Guizhou, authorities in Hainan province have closed an illegal gambling operation at the Mangrove Tree Resort World bar, the second time in less than a year that the place has been shut down for gambling offenses. The bar at the Sanya Bay resort gained international fame in February 2013 after its operators bragged to a Reuters reporter about their ‘cashless casino,’ which offered baccarat and blackjack games at 50 gaming tables that paid out winnings in ‘points’ that could only be redeemed for non-gaming amenities and services at the resort.

According to insiders, the cashless casino was one of as many as 10 such establishments operating on Hainan as part of a pilot project intended to one day evolve into a real-money casino hub to rival Macau, currently the only Chinese jurisdiction in which casino gambling is legal. But as news of the project went international, the reportedly embarrassed authorities decided to bring this pilot in for a crash landing. The shutdown didn’t last long, however, as September brought news that the Mangrove Tree facility was back in operation along with several of its competitors.

On Saturday, state broadcaster China Central Television (CCTV) reported that the Mangrove Tree was back in the casino business, charging a minimum entrance fee of RMB 1k (US $165), which the customers received back in the form of casino chips. In response to the CCTV report, officials in Hainan held an emergency meeting Saturday night, at which Mayor Wang Yong ordered the Mangrove Tree’s bar shut, only to be told by local cops that they’d actually shut down the casino on Jan. 16 following a surprise inspection. It’s not clear how the bar was able to bounce back from that setback so soon, but on Sunday Wang said individuals connected to the casino had been detained and suitable punishment would be meted out following further investigation.

The CCTV report also claimed the existence of the cashless casinos had encouraged smaller operators to open their own underground gaming joints, which enjoyed the protection of local police. On Jan. 3, five Hainan police inspectors were sacked over their involvement in the running of a number of illegal gambling operations.

The South China Morning Post quoted a “salewoman” at the Mangrove Tree resort as saying this latest setback would likely be as brief as the previous ones. “The developer is very powerful and will take proper care of the issue.” Said developer is Zhang Baoquan, president of the Antaeus Group and #256 on the latest Forbes China Rich List with an estimated net worth of $605m and (presumably) compromising photos of Chinese leader Xi Jinping. Why else would Zhang appear so confident in thumbing his nose at the law?

As always, deciphering the intentions of the mainland authorities is like reading tea leaves. Their continual Captain Renault-worthy ability to be shocked – shocked! – by news of gambling at Hainan’s integrated resorts is tough to swallow given the fact that everyone seems to have been aware that the cashless wonders had reopened within months or even weeks after last year’s ‘crackdown.’ It remains anyone’s guess as to whether the Party will ever decide to let this pilot open up the throttle or forever stay spinning its wheels on the tarmac.