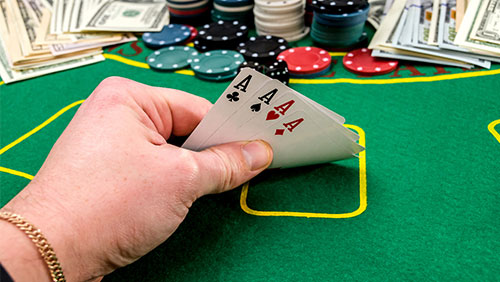 A warning to poker players about carrying large amounts of cash after the President Trump administration removes the restraints applied to the Department of Justice’s Civil Asset Forfeiture Program when Barack Obama was calling the shots.

Some crazy shit happened when I was ten. I was in Blackpool on holiday when my uncle bought me a pen with an image of a Marilyn Monroe lookalike on the side. When you held the pen upright, there was liquid in the pen that made it look like she was wearing a black catsuit. When you tipped the pen upside down, the fluid slowly drained revealing a pair of stockings and suspenders.

I loved that pen.

So did everyone who saw it.

And therein lay the problem.

That bitch, Mrs McCluskey, took it from me, no questions asked, no court of law, nothing. It was the worse abuse of power I had ever seen, and while you may not agree with me, I am sure Californian poker players William Davis and John Newmerzhycky will.

In 2013, Davis and the man with the super confusing long name were driving through Iowa when State Troopers pulled them over and took $100,000 in cash under the Department of Justice’s Civil Asset Forfeiture Program.

The pair were leaving Iowa after appearing in a World Series of Poker Circuit (WSOPC) event in the state. It took three years for them to see that money again after they sued the state’s police force, and a judge sided with them.

In 2016, the then-Attorney General Eric H. Holder Jr. changed the law during Barack Obama’s tenure, when it became apparent that since the terrorist attacks on Sep 11, 2001, police agencies throughout the USA had seized more than 55,000 hauls of cash or other property valued at $3 billion under the dodgy as fuck scheme.

Now, that’s what I call a right royal result.

The End of the Right Royal Result

On Feb 7, in a meeting with US Sheriffs, President Donald Trump expressed his view that the Department of Justice’s Civil Asset Forfeiture Program was the bee’s knees, and that Barack Obama’s administration was nuts to have applied the wheel clamps, promising that his Justice Department would remove them.

On Wednesday, the Justice Department announced a new federal policy reinstating the law, allowing state and local police to take cash and property from people suspected of a crime, without a warrant or a criminal charge.

Deputy Attorney General Rod J. Rosenstein promised that things would be different this time, agreeing to implement safeguards to prevent the problems of the past such as informing those robbed of their rights and status of their seized possession within 45 days, halving the previous time. Officers will also have to provide crystal clear details to the Justice Department about probable cause for seizures.

Rosenstein said the rule change was needed to ‘empower police and prosecutors’ with a tool that could combat ‘crime’ and ‘drug abuse’.

The following quote from Rosenstein {taken from the Washington Post} sums the whole thing up:

“This is going to enable us to work with local police and our prosecutors to make sure that when assets are lawfully seized that they’re not returned to criminals when there’s a valid basis for them to be forfeited.”

If they are not returned to those who owned them then where does the money go?

A 2014 Washington Post investigation found that state and local police were treating the money like video gamers playing Grand Theft Auto buying all manner of crap such as high-powered weapons and armoured cars.

Don’t carry cash or stockings and suspender pens because as Rosenstein admitted – you can’t eliminate instances of abuse or mistakes no matter how watertight these rules are.