The decision by Pennsylvanian authorities to legalise online gambling has prompted RAWA supporters to write to the Department of Justice reminding them that the world will end if they don’t stop people gambling online.

We both speak the same language (even though Las Vegas poker dealers continually threaten to eject me from games for not speaking English when it’s my only language), and our way of ‘living’ is very compatible. But sometimes I feel like I’ve walked into Dunkin Doughnuts to ask for a Kale smoothie.

Take the United States of America for example.

They don’t seem very ‘united’ to me.

Of the 50 states that make up this complicated nation, only four of them have laws in place that allow a fully regulated and legal online gambling framework (New Jersey, Delaware, Nevada, Pennsylvania).

The last state to allow adults to do adult things with their income was Pennsylvania, and it’s sparked a chain reaction that could be hot air, but what the hell, let’s give it a whirl. 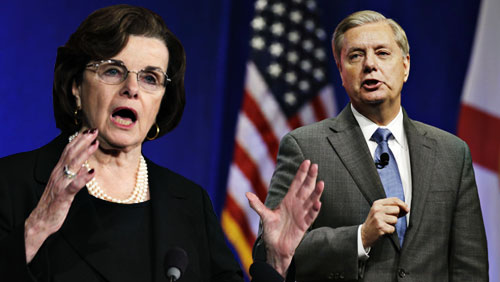 ney General, US Department of Justice.

The letter, written by bipartisan senators Dianne Feinstein (D-CA) and Lindsey Graham (R-SC), called for Mr Rosenstein to take control back from states and place it squarely in the mitts of the federal level when it comes to matters of online gambling.

The anti-online gambling duo began by reminding the Deputy Attorney General, that three years ago they wrote a similar letter to the DOJ warning them that if they didn’t take action quickly, the nation would experience the most fundamental change in gambling in our lifetimes, as computers, tablets and mobiles became casinos available 24 hours a day, 7 days a week.

Graham and Feinstein are pissed that in 2011 the Office of Legal Counsel (OLC) reversed 50 years of interpreting the Wire Act to prohibit all gambling online, which as Steve Ruddock pointed out in an article in OnlinePokerReport would be a remarkable achievement considering the only place you could have found the ‘Internet’ 50-years ago would have been inside someone’s testicles.

Spurred to action by Pennsylvania’s recent verdict. The tag-team continued to impress to Rosenstein that Internat gambling takes gambling too far and that it prey’s on children and society’s most vulnerable.

The letter also suggests that the FBI believes the introduction of online casinos will lead to Ozark like money laundering, that the feds don’t have the resources to manage the shit-show that is online gambling, and that the four states have joined forces to increase the proliferation of online gambling, including the potential to partner with ‘foreign’ gambling companies.

“We fear that unless DOJ promptly revisits its 2011 opinion, our prediction that online casinos could sweep across our country could come to pass.”

Will the DOJ revisit its 2011 opinion?

How the hell do I know?

But I once worked for a manager called Paul. I asked him for productivity advice because I couldn’t get my shit done.

He motioned towards a massive pile of paper on his desk, “See this.”

“It’s been there for weeks. If there were something important in there, I would have heard about it,” said Paul as he pushed the lot into the recycling bin at the foot of his desk.

That’s where I believe this letter will end up.

The future of online gambling in the USA will depend on a few crucial relationships, and one of them could be Sheldon Adelson’s relationship with President Trump.

The Times of Israel reported that Adelson visited the White House at the same time of the Las Vegas Massacre, where a lone gunman killed 59 people and injured over 500 more.

While it’s unknown what forms of policy the pair nattered about, they are both carved from the same casino brick and mortar. Adelson is the cigarette smoking man behind the letter, which is part of a broader plan to restore the 1961 Wire Act (RAWA) making online gambling illegal in the US.

The letter arrived on Rosenstein’s desk a few days shy of New Jersey’s attempts to convince the U.S Supreme Court that adults should be able to bet on the outcome of a sporting event.