The Supreme Court hears less than 0.001% of decisions from the federal circuit courts of appeal.

So, why the New Jersey sports betting case?

The dispute involves somewhat complicated language of a relatively unimportant federal statute – the Professional and Amateur Sports Protection Act, and attempts by the New Jersey Legislature to get around PASPA to legalize sports betting at racetracks and in casinos.

But there may be a major constitutional issue here.  And whatever the decision, the relationship between the states and the federal government, when it comes to gambling, will be forever changed.
The case’s history shows that at least four members of the Supreme Court really wanted to hear this case, and none felt strongly enough against to write a dissent to the granting of cert.  This is most remarkable, because the Court had taken the fairly unusual step of asking the Solicitor General of the United States to file a brief.  He did, saying the case was not worth hearing.  And then, in an extraordinarily rare decision, the Court decided unanimously to hear the case anyway.

I think this is all due to my former classmate, Chief Justice John Roberts (Harvard Law School 1979).  Roberts is strongly for state’s rights, particularly for letting states make their own decisions, free from controls by Congress.  He is also, probably, pro-gambling.

Although I did play poker many, many nights as a 3L with Roberts’ roommate, I have no insight into Roberts’ personal feelings.  But I do know that Roberts once represented casinos.
In 1999, the U.S. Supreme Court decided one of the most important cases involving legal gambling.  Federal law prohibits “lotteries” from advertising on radio or television.  The FCC punished any broadcaster who aired a casino commercial.  The Fifth Circuit held that the law prevented New Orleans broadcasters from running commercials for Louisiana and Mississippi casinos. 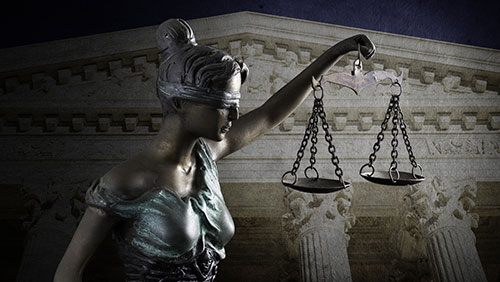 Roberts, then a lawyer in private practice, was hired by the American Gaming Association.  He researched and wrote the brief as the counsel of record for the AGA.  The Supreme Court accepted Roberts’ argument, that it made no sense to allow tribal casinos to advertise when privately owned casinos in the same state could not.

Roberts appreciates that legal gambling is a state issue.  He and the other conservative members of the Court would like to knock out every federal law that prevents states from making their own decisions.

The liberal justices want to hear this case because the position of the lower Court was so extreme.  The first time the dispute reached the Third Circuit, NCAA v. Christie (Christie I), the Court of Appeals ruled PASPA was constitutional by limiting the federal statute to only preventing states from affirmatively passing news laws to legalize and regulate sports betting.  The New Jersey Legislature reacted by passing a bizarre law that literally eliminated all criminal and civil prohibitions on sports betting in a track or casino.  When Christie II reached the full Third Circuit, the Court reversed itself and ruled that PASPA even prevented New Jersey from eliminating its restrictions on sports betting.

Liberal justices do not want the GOP controlled Congress to tell states like California what those states can and cannot do.

I predict a fairly large majority of the Supreme Court will rule that states cannot be told that they have to continue to make a product or service illegal.

But the ruling could be broader.  PASPA should be declared unconstitutifonal because it interferes in an area that comes solely under the state’s police power.  This is the state’s power, and responsibility, to protect the health, safety, and welfare of its residents.  Congress has never before told states that they cannot change their public policies toward gambling.

By the way, the same is true for medicines.  Attorney General Jeff Sessions might be fanatically anti-marijuana, but this Supreme Court would say that at least medicinal marijuana is up to the states.

I’m hoping the Court will give us a clean decision.  The worst result would be a ruling that New Jersey only has the right to decriminalize sports betting, but not regulate it.  Other states would follow, with some truly weird statutes eliminating laws against sports betting, and who knows what else.

Even if New Jersey loses, PASPA is toast.  The law was passed in 1992, when there was no World Wide Web, let alone Internet gambling, daily fantasy sports or eSports.  States and gaming operators will see that they can create coalitions in Congress on the state’s right issue of letting states make their own decisions about gambling.

Why should Congress be able to tell New Jersey that it cannot take bets on professional sports events?  And why would Senators or Representatives from other states care?

And why should the federal government be involved at all, if two or more states decide to allow their licensed operators to take bets from each other?  Nevada and Delaware are pooling online poker players, with neither state falling into the abyss.