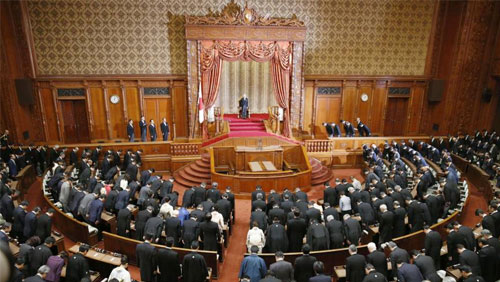 The majority of Japanese legislators are behind the push to introduce casinos to the country. The subject has been debated by the lawmakers consistently since well before the beginning of the year, and there has been talk about extending the current session just to be able to approve casino bills. However, not everyone is thrilled about the possibility, and a few lawmakers are making last-minute appeals to try and stop possible legislation.

Specifically, five House of Representatives members from five different parties don’t want the bills to be approved. They held a press conference at the Diet Building on Tuesday in an attempt to sway opinion on the Integrated Resort (IR) Implementation Bill currently being discussed by the Lower House. The press conference was organized by Tomoko Abe of the Constitutional Democratic Party of Japan, and also included Masaharu Nakagawa of the Group of Independents, Denny Tamaki of the Liberal Party, Shuji Inatomi of the Democratic Party For the People, and Tetsuya Shiokawa of the Japan Communist Party.

According to the representatives, opinion polls have shown that majority of the public is opposed to legalized casinos. They added that the government has not sufficiently laid out a course of action to minimize public harm and that adequate parliamentary discussion has been cut off to benefit the current administration’s political convenience.

Abe used comments made by Minister of Land, Infrastructure, Transport and Tourism Keiichi Ishi to substantiate the claims. He stated that Ishii has confirmed that he doesn’t fully understand the contents of the bill, which was created by bureaucrats without any input from him.

Abe also reaffirmed comments made by other critics who have said that the government has presented the bill as a means to attract a larger number of foreign tourists to Japan. However, this idea wasn’t supported by any data and many feel that the majority of the casino customers would, in fact, be Japanese customers. She added that the policies should not be decided by a handful of local pro-casino governments when social issues that could arise from casinos would impact all residents across the country.

The opposition’s arguments more than likely won’t hold up. The Cabinet Committee discussing the bill is expected to reach a decision on Wednesday, paving the way for it to be sent to the House of Representatives for voting. If it passes–which could come as early as June 14–the bill would then be sent to the House of Councillors for final approval.