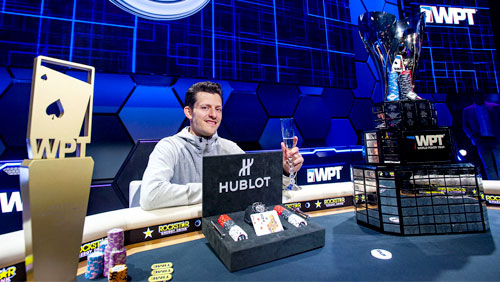 It’s was so hot the cacti were complaining.

The Aviation Club de France (ACF) was many things to many people. And it was a roaster if you ever made a televised World Poker Tour (WPT) final.

As it was on Saturday 10 September 2011, the day when Waxman became a WPT Champion after winning the coveted WPT Grand Prix de Paris.

That win in Paris qualified him to enter the 2018 WPT Tournament of Champions (TOC). Waxman nearly didn’t come – according to the WPT blog, the combination of $15,000 buy-in, a lack of form and playing against the very best in the business played into that decision, but if WPT Champions are anything, they’re stubborn.

Only this time, there was no intimate cookhouse of a final table, it was a cold, cavernous esports arena in Las Vegas.

80 players entered the third iteration of the TOC.

Before you spit your onions out in laughter, it’s worth noting that this two digit number represents the most successful field of the lot after Farid Yachou beat 64 entrants at the end of his fairytale run, and Daniel Weinman battered a field containing two more peeps 12-months later.

The first two days played out at ARIA.

WPT Los Angeles Poker Classic (LAPC) Champ Dennis Blieden topped a field of 29 players at the end of Day 1, but would later hit the rail as the official money bubble boy.

Day 2 saw the incredible presence of Darren Elias rise to the top, and the recently crowned four-time WPT winner entered the final table searching for back-to-back WPT titles with the chip lead.

With the final table set, the last six waved bye-bye to the ARIA and hollered hello to the brand new state of the art esports facility at MGM’s Luxor – The Las Vegas Esports Arena.

And man, Elias came close to spraying his dominance all over the place.

Elias and Waxman were three-handed (Matas Cimbolas was also in the race) when the Elias picked up pocket queens at the same time Waxman looked down to see pocket jacks. The money went in, and Elias was about to take on Cimbolas, heads-up, with a healthy chip lead, when Waxman turned a straight to double up and take the lead.

It was a pivotal moment in the tournament.

Waxman grew in confidence from that point onwards, and after Cimbolas eliminated Elias in the battle of the short-stacks, Waxman entered heads-up with a 2:1 chip lead over the former WPT UK champ.

The heads-up action was long and often ponderous with Waxman taking 100% of pots of any significance ending in the right call with the second pair to send Cimbolas and his ten high to the rail.

It’s Waxman’s first win since winning the Rock n Roll Poker Open in 2013 for $123,598, and his second most significant score outside of his Parisian victory.

“I’m glad to be lucky today,” Waxman told Matt Savage after the game, referencing his double up against Elias.

Let’s hope next time he brings a pair of woolly socks and long johns.

The Las Vegas native was one of 54 entrants who took part in the $25,500 buy-in WPT Bellagio High Roller. The event began at the Bellagio on May 6, with the final table shifting to the Las Vegas Esports Arena on Friday, 25 May.

Marchese’s biggest threat was David Peters; Peters jetted into the Bellagio portion of this event direct from another outstanding display at the European Poker Tour (EPT) Main Event in Monte Carlo, finishing, finishing fourth, but was edged out of this one by Marchese after AA spanked KQ after the latter had flopped top pair.

Heads-up, Marchese faced the lesser known Aaron Ogus for the title. Ogus held the chip lead for a period before running an unsuccessful bluff to allow Marchese in the door, and like a vampire, the man didn’t leave until he was the only one left alive.