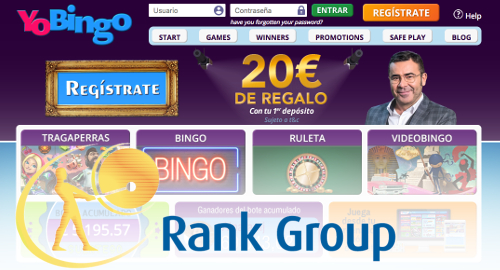 On Tuesday, Rank’s board of directors announced that it had reached a deal to acquire the entire issued share capital of QSB Gaming Ltd, the parent company of YoBingo.es. The deal calls for Rank to make an upfront payment of €21m, with a potential total payout of €52m based on the Spanish operation’s future performance.

Rank says QSB and its subsidiaries generated revenue and earnings of €10.4m and €2.5m, respectively, in the 12 months ending December 31, 2017. Newly appointed Rank CEO John O’Reilly said the deal would expand on his company’s established Spanish retail business Enracha, which soft-launched its digital operations in September 2017.

Rank has made multi-channel part of its new overall strategy and the company believes YoBingo will accelerate this strategy in Spain. In addition to being Spain’s number-two online bingo operator with a 30% market share, YoBingo also holds a 5% share of Spain’s online slots market and boasts a proprietary platform “with strong potential to support other regulated markets.”

Rank had more somber news to report on the home front, as its Grosvenor Casinos brand recently announced it will close its gaming venue at the Leisure Exchange in Bradford. The venue employs 69 staff members, with whom the company is discussing possible relocation to other Grosvenor venues.

Grosvenor Casinos national operations director Debbie Husband said the decision to shut the Bradford venue “has not been taken lightly” but the club “has been challenged for some time and has reached a point where it is no longer viable to continue trading.” Husband invited the Bradford venue’s patrons to check out Grosvenor venues in Hudderfield and Leeds, or visit the GrosvenorCasinos.com site.