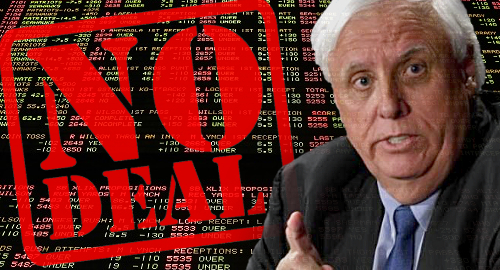 Confusion reigns in West Virginia after the governor erroneously claimed a deal had been reached to pay a “sports consortium” a cut of sports betting handle.

On Wednesday, West Virginia Gov. Jim Justice convened a meeting with his state’s casino operators, reps from pro sports leagues (NBA, MLB, NHL and the PGA) and the state’s two NCAA Division I universities. According to WV Metro News, the discussion centered around the leagues’ pursuit of a sports betting ‘integrity fee’, i.e. a cut of legal wagering handle that would ostensibly fund anti-fixing monitoring.

The state legislature approved a sports betting bill in February that adamantly rejected giving sports leagues a cut of wagering handle, but recent weeks saw Gov. Justice suggest convening a special legislative session to tinker with the legislation to incorporate an integrity fee.

On Thursday morning, Justice’s office issued a statement claiming a “tentative agreement” had been reached that would see casino operators pay the integrity fee rather than the state. The statement went on to say that WV Lottery director Alan Larrick “will be working on ways to implement the integrity fee and will determine what, if any, legislation is needed for codification.”

Pushback came almost immediately from some of the other parties to Wednesday’s meeting, including Penn National Gaming’s Eric Schippers, who told WV Metro News that “it looks like the governor’s office jumped the gun” and that “there is no agreement in place.”

John Cavacini, president of the West Virginia Gaming and Racing Association, said he was “shocked” at Justice’s announcement. Cavacini said Wednesday’s meeting had concluded only with the parties agreeing to “look at contractual agreements between each property and major league sports and do it from a contractual standpoint.”

Justice’s office subsequently issued a statement saying “the process is still in the very early stages and many details still need to be worked out.”

WHAT’S THE DEAL?
WV Metro News reported that the concept being bandied about revolves around the casinos agreeing to use league-supplied data for wagering purposes, for which the casinos would have to pay the leagues. The mandatory use of league-supplied data has been among the leagues’ demands as the US Supreme Court prepares to issue a ruling on New Jersey’s quest to overturn the longstanding federal sports betting prohibition.

The state has no pro sports teams, which allowed it greater freedom to thumb its nose at the league’s integrity fee cash grab. However, West Virginia University and Marshall University are NCAA Division I athletic members, and the NCAA joined the four major pro sports leagues and the US Department of Justice in opposing New Jersey’s pursuit of legal betting.

The leagues originally demanded a 1% cut of sports betting handle, which operators were quick to point out equated to over one-fifth of betting revenue, effectively rendering their sportsbooks unprofitable from wager one. The leagues have occasionally dropped the integrity pretense, referring openly to a ‘betting rights’ fee on their intellectual property.

Gov. Justice recently claimed to have “negotiated” the leagues down to accepting a 0.25% cut of betting handle, which some have suggested was the leagues’ goal all along, and that the outrageous 1% ask was simply a way to make their reduced (but still unwarranted) profit-sharing request seem more palatable.