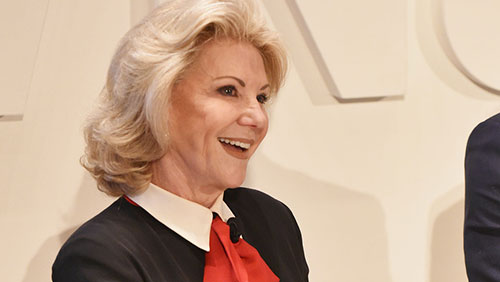 Shortly after regaining her voting power, Elaine Wynn has already made her first request—to overhaul Wynn Resorts’ board of not-so-young directors.

Wynn, currently the casino operator’s largest single shareholder with 9.26% stake, sent a letter to the current board of directors on Tuesday, in which she requested sweeping changes in a bid to “fully restore” Wynn Resorts‘ reputation. Specifically, Wynn wanted the board to “reopen the window” for at least 60 days ahead of the 2018 annual general meeting so shareholders can nominate directors and propose other business.

“I hereby request that… the board take steps that would allow for a majority of the board to be comprised of new directors effective at the 2018 annual meeting,” Wynn wrote.

To achieve this, Wynn outlined two “possible paths.” The first involved declassifying the board, or the existing directors could vote to increase its size so “the newly elected directors would constitute a majority of the board.”

Fret not, however, because Elaine Wynn said she doesn’t intend to nominate herself, or anyone closely associated with her, either personally or professionally. Instead, Elaine Wynn wants nominees who have requisite expertise and “would be highly respected and, in most cases, have significant public company experience.”

Elaine Wynn also sought to put all of the casino company’s major transactions on hold until after the new board has been installed, possibly alluding to reports that Wynn Resorts is considering selling Wynn Boston Harbor.

The new board of directors should be able to help Wynn Resorts address its existing challenges, which include allegations of decades-long sexual misconduct against its founder and former Chairman Steve Wynn. The one-time King of Las Vegas stepped down, sold his stock, and more recently, settled all litigation with his ex-wife, Elaine, in connection with the alleged breach of a stockholders agreement in 2012.

Steve Wynn was considered a strategic visionary, not to mention Wynn Resorts’ chief diplomat, and his complete departure poses a challenge to the company and its board of not-so-young directors—a sentiment that Elaine Wynn apparently shared.

“Because all of the candidates I nominate would, by definition, they would not be in a position to have their independence questioned due to excessively long tenure—unlike some of the incumbent directors who have served for over 15 years,” she wrote.