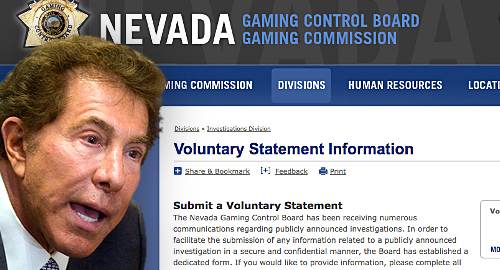 Nevada gaming regulators have begun accepting sexual harassment complaints about Steve Wynn via its website, apparently because handling the volume of complaints via traditional means was interfering with its other regulatory responsibilities.

On Monday, the Nevada Gaming Control Board’s website added a Voluntary Statement Information section to handle the “numerous communications regarding publicly announced investigations.” The GCB insists that all submissions will be handled “in a secure and confidential manner.”

The Wall Street Journal quoted GCB chair Becky Harris saying the regulator has been deluged by phone, email and snail-mail complaints since the initial reports of a decades-long pattern of sexual harassment by Steve Wynn against Wynn Resorts’ female staff members.

Harris said the volume of complaints had become “disruptive … It was a challenge to conduct the necessary business of the board.” GCB members will contact individuals should the GCB have questions regarding the specifics of their complaint.

The GCB is currently conducting an investigation into the allegations that ultimately convinced Steve Wynn to resign as Wynn Resorts CEO and chairman last week, despite his insistence that the allegations are “preposterous.” Steve also announced Friday that he was dropping his long-held opposition to his ex-wife Elaine selling her 9.4% stake in the casino company.

Analysts are undecided on the long-term effect of the allegations on the Wynn Resorts brand. While some believe that Steve’s swift resignation could limit the negative effects, others have suggested that much will depend on what the investigations in Nevada and Massachusetts reveal about what Wynn’s board of directors knew and when they knew it.

Should Wynn’s board be exposed as having been complicit in covering up Steve’s shenanigans, some marketing experts consulted by the Las Vegas Review-Journal suggested the official slogan of Las Vegas – what happens here, stays here – could take on a decidedly creepy tone and might have to be retired after 16 years of use.