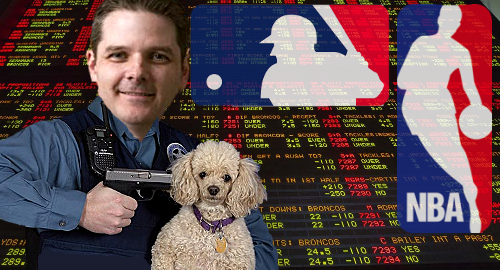 The National Basketball Association and Major League Baseball continue to press their demand for a 1% cut of legal sports betting handle, despite nearly every other stakeholder deriding the plan as unworkable.

Monday brought committee hearings into West Virginia legislators’ plans to be ready in case the US Supreme Court strikes down the federal sports betting prohibition. Legislators are considering a bill that would allow the state’s five casino operators to offer sports betting under the oversight of the West Virginia Lottery Commission.

The legislation could come up for a floor vote on Friday, but the NBA and MLB are doing their best to derail the vote, based on the leagues’ belief that they deserve a 1% cut of all wagers placed on their respective sports. This ‘integrity fee’ has been widely slammed as an overly generous slice of what is an extremely low-margin business.

Speaking at Monday’s hearing on behalf of both the NBA and MLB, attorney Scott Ward claimed the leagues would use their slice of betting handle to monitor for betting activity for suspicious patterns and to enforce bans on their players making wagers. The leagues also want to require betting operators to use league-provided data for live betting.

Lottery Commission chief counsel Danielle Boyd told legislators that it was “hard for us to quite wrap our heads around how the costs of monitoring integrity would increase in a regulated market.” Boyd also noted that the leagues’ returns from a 1% cut of handle would likely exceed the state’s 10% tax on operator revenue.

THESE NETS AND BALLS COST MONEY, YOU KNOW…
NBA Commissioner Adam Silver made waves a few years ago by calling for a federally regulated betting market to supplant the betting ban. In follow-up interviews, Silver played coy with the NBA’s revenue expectations, saying only that the leagues might take “some sort of percentage that comes off the top,” which would be “poured back in” to integrity efforts.

Spillane claimed that the NBA was owed the fee because it invests “billions and billions of dollars into creating a quality product” and needed to be compensated to offset the added integrity costs of legal betting, inadvertently suggesting that the NBA is (a) currently doing nothing to ensure integrity, (b) would continue to do nothing should legal betting not happen, and (c) is an entirely altruistic organization with no profit expectations whatsoever.

Spillane further claimed that the leagues, not betting operators, bore the greatest risk from a possible betting scandal, “and we should be compensated for that.” However, Spillane admitted to New York legislators just last month that he has “no reason to believe” that the NBA currently has any issues with regards to manipulation of its games.

Spillane rejected the idea that the 1% cut of handle would create an “undue burden” for other betting participants. To support this view, Spillane noted recent comments by Penn National Gaming’s CEO about the ancillary benefits casinos would derive from the extra foot traffic legal betting would bring.

(Spillane apparently missed the part where Penn National’s president warned that betting was “not a cash cow” so stakeholders would be well advised to “not get greedy on this subject.”)

MAJOR LEAGUE BETTING
MLB Commissioner Rob Manfred has been less publicly emphatic about legal sports betting, saying last spring that the league was “reexamining our stance on gambling.” By last summer, Manfred was saying the league needed to “meaningfully engage and shape, try to shape what the new regulatory scheme looks like.”

On Monday, MetroNews quoted a fresh MLB statement that claimed West Virginia’s betting legislation “unfortunately falls short” of meeting the league’s desire for “clear, robust, enforceable protections to mitigate any possible risks to our games.” That said, MLB remains “hopeful the legislature will complete a significant overhaul of the law and bolster protections,” primarily by protecting MLB’s bottom line.