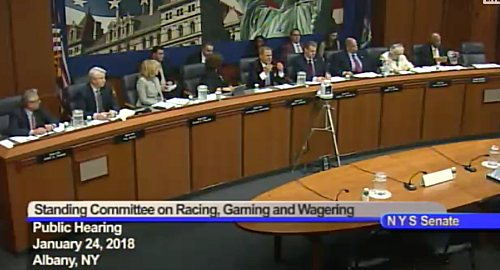 States like New York are frantically trying to prepare the ground in case the US Supreme Court chooses to overturn the federal sports betting prohibition, while other stakeholders are keen to ensure they have a seat at the table when legal sports betting commences.

NBA SAYS ‘F**K YOU, PAY US’
The first witness to offer testimony was Dan Spillane, assistant legal counsel for the National Basketball Association (NBA), who laid out a five-point program the league would like to see in any legal betting environment. (Read Spillane’s prepared remarks here.)

Among the most notable aspects of the NBA’s remarks was the shift in absolute support for a federal betting regulatory environment to support for “a comprehensive sports betting bill that would serve as a model for a 50-state solution—whether that happens in Congress or on a state-by-state basis.”

Spillane said the NBA’s preference remains for a federal solution, but since individual states are moving faster than their federal counterparts, the NBA “cannot sit on the sidelines while this activity is occurring.”

The NBA’s five points include the controversial proposal recently put forward in Indiana that would offer sports leagues 1% of all bets placed on their respective games. The NBA claims this fee is needed to “compensate leagues for the risk and expense created by betting and the commercial value our product creates for betting operators.’

The NBA further justified the need for this fee because the leagues will “need to invest more in compliance and enforcement, including bet monitoring, investigations, and education.” 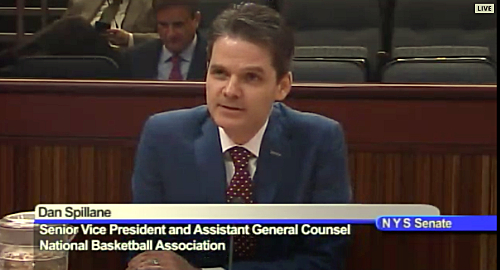 However, when queried by senators, Spillane admitted that the league had “no reason to believe we have an issue” with regards to manipulation of games. As for insider betting on games or disclosure of inside info to other bettors, Spillane said the NBA had only “occasional … but infrequent” concerns.

The NBA also wants a say in what types of bets are made available, with a pejorative eye cast toward novelty and spot-wagers – first foul, first three-pointer, etc. – but when pressed, Spillane admitted that he didn’t have a specific list of wagers the league would find beyond the pale

Finally, the NBA insists that any successful regulatory scheme would have to include online betting in addition to land-based wagers. Otherwise, bettors who are geographically distant from licensed gaming venues will continue to patronize internationally licensed online betting sites.

Racing’s overall concern is not being left out of the sports betting mix when New York gives the green light. The state previously authorized betting at the state’s four new commercial casinos when it approved the casino legislation in 2013, and the tracks insist they have a right to join this party.

Kay was asked if tracks, which currently conduct pari-mutuel wagering, were prepared to deal with the potential operator losses that fixed-odds betting occasionally presents. Kay said tracks already factor in rained-out racing events when they craft their budgets, and knowing the risks in advance allows firms to store up reserves to deal with the occasional hiccup.

The tracks also insist that legal betting shouldn’t be limited to land-based channels. Kay noted that 88-91% of all pari-mutuel wagering is conducted either online or via off-track betting facilities. Cannizzo claimed online advance deposit wagering accounted for 70% of national pari-mutuel betting handle.

Russell voiced support for the NBA’s desired 1% integrity fee, saying the “only successful regulatory model has to have sports at the center.” US-licensed operators would also benefit by being the only ones who can access the volume of sports data derived from league activity, creating a “virtuous loop” and leaving unauthorized online betting operators “marginalized.”

Cunningham suggested Australia’s betting model – in which sporting bodies have the authority to restrict what types of wagers are permitted on their respective sports – was perhaps the model for the US to follow. Russell added that the infamous UK pie-eating keeper scandal wouldn’t have occurred in Australia. 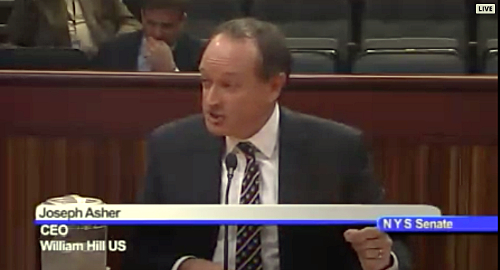 WILLIAM HILL SAYS LEAGUES ARE RICH ENOUGH ALREADY
William Hill US CEO Joe Asher pushed back against the need for any state to pay sports leagues an integrity fee, which he called “a euphemism for a cut of the action.” Asher said leagues weren’t hurting for money, and thus there was “no need to divert tax revenue from the citizens of New York to a privileged few.”

Asher also noted that sports betting was a low-margin business, citing average Nevada sports betting hold rates of less than 5% in recent years. And mobile wagering – which currently accounts for 56% of William Hill’s Nevada handle and is claiming a larger slice ever year – is an even lower-margin product.

Asher said it would be “essential” for state-licensed sportsbooks to be able to offer wagers on college sports. Betting on these games will remain accessible via internationally licensed sites, and if state-licensed books can’t match these offers, channeling punters to state-approved sites would make a hard job even more difficult.

BATTING CLEANUP
The day’s final speakers included Scott Freeman, GM of the Tioga Downs Casino, who unsurprisingly urged the state to honor its 2013 legislation that restricted sports betting to the four commercial casinos.

Freeman says this four-way casino monopoly would help the new casinos “beat the gap” between their original revenue projections and their actual disappointing returns to date.

Freeman got some pushback from Sen. Kathleen Marchione, whose district includes the Saratoga racetrack, which would be shut out of the betting bonanza if Freeman got his wish. Marchione tried to get Freeman to admit that it was too early to declare the four new casinos DOA, but Freeman essentially argued that the new venues were on life support.

Up next was New York State Gaming Association exec director Michael Kane, who said limiting betting to the four casinos would negatively impact the state’s tax revenue. Kane suggested the state’s video gaming (slots) licensees should also participate, and called for in-venue registration for mobile wagering and for online servers to be housed at land-based venues.

Kane also suggested that legalizing betting wouldn’t require New York to amend its constitution, suggesting the same approach that exempted daily fantasy sports – declaring it a ‘game of skill’ rather than a prohibited ‘game of chance’ – would suffice.

The final speaker was James Maney, director of the New York Council on Problem Gambling, who urged legislators to enact the necessary safeguards to ensure legal betting didn’t result in an explosion of problem gambling activity.